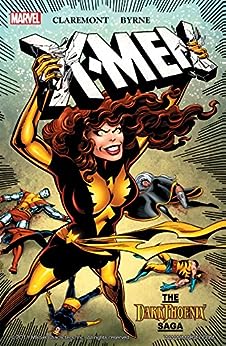 Believe the hype: the Dark Phoenix saga is one of the greatest comics stories ever. Conceived by writer Chris Claremont and penciller John Byrne (credited as co-plotters, and aided immeasurably by inker Terry Austin), the story begins in The Uncanny X-Men #129 when Professor X sends his team in search of two new mutants detected by Cerebro. The figures in question turn out to be Kitty Pride, who would eventually join the team as Sprite, and the flashy disco singer Dazzler, who would go on to star in her own book. Little do the X-Men know that they're walking into a trap set by the Hellfire Club, a group of supervillains that seem perfectly matched to counter our merry mutants. The insidious part of the plot, however, is how a mysterious man named Jason Wyngarde seems to have been Jean Grey's lover in another time, another era, and how that might give him control over her now. Jean Grey was, like Cyclops, an original member of the X-Men, and had the power of telepathy (a gentle power, like that of the Invisible Girl of the same era). When she was reborn as Phoenix in issue #108, however, she became power incarnate. Can it be controlled, or must the X-Men make a choice between the woman they love and the fate of the universe? It's all here in this nine-issue volume, plus Wolverine alone, Emma Frost, the return of original members Angel and Beast, and a showdown with Lilandra's Imperial Guard in one of comics' great milestone issues, X-Men #137. Read it, true believer--'nuff said. --David Horiuchi --Este texto se refere à uma edição alternativa kindle_edition

Azman316
4,0 de 5 estrelas Glad I did
Avaliado no Reino Unido em 18 de abril de 2017
Compra verificada
I'm a fairly casual comic reader but I thought I'd give this ago due to it's classic status. Glad I did. Recommended.
Ler mais
Informar abuso
Traduzir avaliação para Português

Big Kahuna
5,0 de 5 estrelas X Man Phoenix Review
Avaliado no Reino Unido em 18 de março de 2012
Compra verificada
For anyone collecting comics this tome will be one the most wanted items in any list

and that is enough said, it is one of the best ever stories with the x - man

I also strongly recommend the classic "Days of A Future Past"