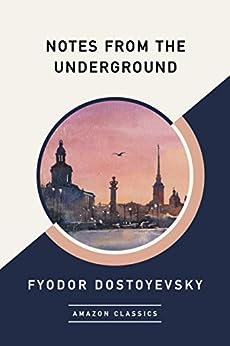 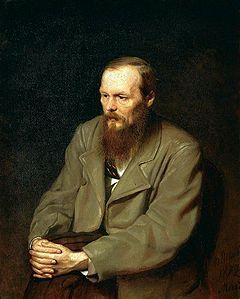 Isolated from society in a tenement basement in St. Petersburg, a malicious former civil servant vents his resentments. In the rambling notes that follow, we are exposed to the inner turmoil of the Underground Man, who represents the voice of his generation. An emotional, paranoid knot of contradictions, the spiteful narrator is also desperate to join a society he loathes, if only to prove his superiority to it.

Exploring themes of free will versus determinism, Dostoyevsky’s existential exploration was written to challenge increasingly popular Western egoist philosophies. In the Underground Man, he found the embodiment of the antihero, whose behavior—like all human behavior—defies rationalization.

AmazonClassics brings you timeless works from the masters of storytelling. Ideal for anyone who wants to read a great work for the first time or rediscover an old favorite, these new editions open the door to literature’s most unforgettable characters and beloved worlds.

Dostoevsky's most revolutionary novel," Notes from Underground marks the dividing line between 19th- and 20th- century fiction, and between the visions of self each century embodied. One of the most remarkable characters in literature, the unnamed narrator is a former official who has defiantly withdrawn into an underground existence. In full retreat from society, he scrawls a passionate, obsessive, self-contradictory narrative that serves as a devastating attack on social utopianism and an assertion of man's essentially irrational nature.
Richard Pevear and Larissa Volokhonsky, whose Dostoevsky translations have become the standard, give us a brilliantly faithful edition of this classic novel, conveying all the tragedy and tormented comedy of the original. --Este texto se refere à uma edição alternativa kindle_edition

Fyodor Dostoyevsky (1821 - 1881) was a Russian novelist, short story writer and essayist whose literary works explored human psychology in the troubled political, social, and spiritual context of nineteenth-century Russia. A student of the Nikolayev Military Engineering Institute, Dostoyevsky initially worked as an engineer, but began translating books to earn extra money. The publication of his first novel, Poor Folk, allowed him to join St. Petersburg's literary circles. A prolific writer, Dostoyevsky is best known for work from the latter part of his career, including the classic novels Crime and Punishment, The Idiot and The Brothers Karamazov. --Este texto se refere à uma edição alternativa kindle_edition

From the award-winning translators Richard Pevear and Larissa Volokhonsky, with an introduction and notes

The apology and confession of a minor mid-nineteenth-century Russian official, Notes from Underground is a half-desperate, half-mocking political critique and a powerful, absurdly comical account of one man's break from society and his descent 'underground'.

Webster’s edition of this classic is organized to expose the reader to a maximum number of synonyms and antonyms for difficult and often ambiguous English words that are encountered in other works of literature, conversation, or academic examinations. Extremely rare or idiosyncratic words and expressions are given lower priority in the notes compared to words which are "difficult, and often encountered" in examinations. Rather than supply a single synonym, many are provided for a variety of meanings, allowing readers to better grasp the ambiguity of the English language, and avoid using the notes as a pure crutch. Having the reader decipher a word’s meaning within context serves to improve vocabulary retention and understanding. Each page covers words not already highlighted on previous pages. If a difficult word is not noted on a page, chances are that it has been highlighted on a previous page. A more complete thesaurus is supplied at the end of the book; Synonyms and antonyms are extracted from Webster’s Online Dictionary. --Este texto se refere à uma edição alternativa kindle_edition
Leia mais

Henrique
5,0 de 5 estrelas The author was ahead of his time
Avaliado no Brasil em 11 de abril de 2021
Compra verificada
The spiteful man from the underground was announcing the advent of nihilism and revealing in this book wha are the consequences of a man whose moral values had been lost track over the course of his life.
40 years before the soviet union takes place this man had in advance exposed the faliure of a system which is predicted upon no beliefs (structural one).
A man (in the west) who tries to neglect all the belief system upon which our society was predicted on is obviously going to get himself left in miserable because no man can ever create his own values out of nothingness in the short course of his life.
Amazing book.
Disclaimer: Don't allow yourself to drift your soul into someone akin to the underground man.

Gabriel Padilha Alves
5,0 de 5 estrelas Eye opening
Avaliado no Brasil em 5 de fevereiro de 2020
Compra verificada
This book is about a guy who wrote some notes in some underground about a few moments of his life where he was aware that he was doing wrong, but still continued to do so.

What I think that the main message of this book is: it is hard to be aware of our own evilness and choose to act right. This can be seen when he says that "to be too conscious is an illness" and in the parts where he talks about choice, that we want to have independent choice "whatever that independence may cost and wherever it may lead."

M. Dowden
5,0 de 5 estrelas Well Worth Reading
Avaliado no Reino Unido em 4 de dezembro de 2017
Compra verificada
Considered to be one of the first existentialist works, this novella was first published in 1864, long before such books became more popular and written. Here we have a narrator who is definitely an anti-hero and certainly, as you read this, you find to be quite unreliable.

The tale is set out in two parts and in the first we find out more about the thoughts and the character of our narrator, who can be nasty out of spitefulness, not because he really wants to be, he just needs to out of his compulsions. Thus, although we can see him carrying out certain actions, even he realises that they are not really something he is proud of, but just cannot stop.

In the second part we find out how he acts within different scenarios, and once again we see his contradictory attitudes, and thus whilst we can see good in him, we can also see the bad. With Russia undergoing changes within, with more influences from its European neighbours being taken on board so there were lots of discussions about the good and bad of European and Russian ideas and ideals, which was most probably the inspiration for this novella.

There are some interesting juxtapositions with the themes and ideas brought up here, and shown through the narrator we see these being acted out. Always a thoughtful read this does bring up the realities and problems with the idea of what free thought and actions are, and comparing this to a more collectivist idea.

If you are reading existentialist novels of the 20th Century and enjoying them, then it is a good idea to go back to the previous century and look at things such as this tale.

Kaywire
5,0 de 5 estrelas A really engrossing "rant."
Avaliado no Reino Unido em 11 de setembro de 2017
Compra verificada
I never thought a few years ago that I'd be reviewing a book by Dostoevsky and saying it was a cracking good read. But there you go - in the hands of very good translators that's what you have here. I think translators are the unsung heroes of our times. It's said that it is the first existential novel - I had to look that up - and it seems that I have read nearly all on the list without really knowing what it means - it appears that I like a really good rant. I have another one to add to the list - Knut Hansum's "Hunger." Now that's a rant and a half.
Ler mais
11 pessoas acharam isso útil
Informar abuso
Traduzir avaliação para Português

The first work of Dostoyevsky I've read. It's a first-person narrative of a short period of the life of a very bitter man. His resentment and bile bubble up continuously and, even though he knows he's ruining his life, he wallows in the self-righteous comfort of this bitter stew. There are moments of painful humanity as he acknowledges the damage that he's only doing to himself, rather than those he bears pointless grudges against. There's a lesson here for everyone. I was hugely impressed within the first few pages, and continued to be gripped to the very bitter end.

I can't believe someone was writing such deeply honest and insightful work in the 1860s. Dostoyevsky was far ahead of his time, and I'll be reading more of his work.
Ler mais
14 pessoas acharam isso útil
Informar abuso
Traduzir avaliação para Português

Palak
5,0 de 5 estrelas Thought provoking
Avaliado na Índia em 24 de março de 2020
Compra verificada
Notes from Underground was a strange read, to say the least. I was annoyed, amused, disgusted, surprised, and made to feel sad by Underground Man. While reading the first part, which is a monologue by our insolent Underground Man, I was so irritated I wanted to throw the book away. But I could not act on my impulses (just like Underground Man) and kept reading. I would've never picked up this book had it not been recommended to me by a college professor, and I'm glad it was. If you enjoy European history, this book is an excellent insight into the Russian intelligentsia's response to western European influences on Russia in the 19th century. It is also a brilliant analysis of human nature in all its ridiculousness. If you end up reading Notes from Underground, I can promise you that you will want to punch Underground Man, but I can also promise that you'll be so glad that you know him.
Ler mais

5,0 de 5 estrelas Thought provoking
Avaliado na Índia em 24 de março de 2020
Notes from Underground was a strange read, to say the least. I was annoyed, amused, disgusted, surprised, and made to feel sad by Underground Man. While reading the first part, which is a monologue by our insolent Underground Man, I was so irritated I wanted to throw the book away. But I could not act on my impulses (just like Underground Man) and kept reading. I would've never picked up this book had it not been recommended to me by a college professor, and I'm glad it was. If you enjoy European history, this book is an excellent insight into the Russian intelligentsia's response to western European influences on Russia in the 19th century. It is also a brilliant analysis of human nature in all its ridiculousness. If you end up reading Notes from Underground, I can promise you that you will want to punch Underground Man, but I can also promise that you'll be so glad that you know him.
Imagens nesta avaliação

davidB
5,0 de 5 estrelas Malevolence inhabits us all: to think we are a good person is to not have looked into the pit of ones soul.
Avaliado no Reino Unido em 13 de maio de 2017
Compra verificada
Dostoyevsky captures what it is to be human creating multiple protagonist that then fight out their point of view as if Dostoyevsky has multiple views himself and allowed his characters to work out what was what in life.
Ler mais
4 pessoas acharam isso útil
Informar abuso
Traduzir avaliação para Português
Visualizar todas as avaliações
Voltar ao início
Conheça-nos
Ganhe dinheiro conosco
Deixe-nos ajudá-lo
Pagamento
E não se esqueça:
© 2012-2021, Amazon.com, Inc. ou suas afiliadas