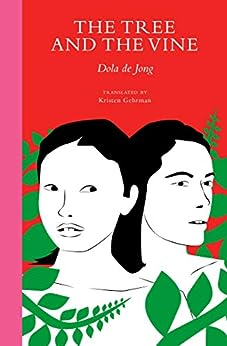 The Tree and the Vine (English Edition) eBook Kindle

"De Jong depicts the darker, dangerous side of the world of same-sex desire, and the way it’s a source of torment—physical and psychological—for those who exist within it."—The Paris Review

When Bea meets Erica at the home of a mutual friend, this chance encounter sets the stage for the story of two women torn between desire and taboo in the years leading up to the Nazi occupation of Amsterdam. Erica, a reckless young journalist, pursues passionate but abusive affairs with different women. Bea, a reserved secretary, grows increasingly obsessed with Erica, yet denial and shame keep her from recognizing her attraction. Only Bea’s discovery that Erica is half-Jewish and a member of the Dutch resistance—and thus in danger—brings her closer to accepting her own feelings.

First published in 1954 in the Netherlands, Dola de Jong’s The Tree and the Vine was a groundbreaking work in its time for its frank and sensitive depiction of the love between two women, now available in a new translation.

I met Erica in 1938 at the home of a mutual acquaintance―a superficial acquaintance, as far as I was concerned, and not someone I wanted to spend a lot of time with. Wies and I had spent six weeks next to each other in a hospital room, and our time together had not inspired me to get to know her any better. After a month and a half, I’d had my fill. Wies is the type of woman who, once she gets a fellow female to herself, casts a net of feminine solidarity, and the only way to escape is to run away as fast as you can, but that wasn’t an option for me at the time. She had thick skin, typical of her kind, and my lack of enthusiasm and feigned drowsiness only seemed to make her want to confide in me even more. After being released from the hospital two weeks before I was, she visited me often and brought flowers and treats.

I felt like I couldn’t completely ignore her after that, so every now and then I made a point to accept one of her many invitations. I had an aversion to offending people back then, not that I can blame myself for it―it was at her house that I met Erica. It was a warm summer evening, and I decided to ride my bicycle over to Wies’s to pay my obligatory visit. To be honest, I was hoping she wouldn’t be home, so I could just drop a note in the mailbox and my duty would be done. But as soon as I rang the doorbell, the door opened, and I found myself trapped once again.

Erica was lying on the couch next to the open balcony doors. When Wies introduced us, she seemed to hesitate for a moment as to whether or not to stand up. My outstretched hand decided for her; with an agile swing of the legs, she slid off the couch. I was attracted to her immediately and forgot all about the burden of my visit. Even now, after all these years, I still picture Erica gliding off the couch to take my hand. Her face was round and youthful, but she had the mouth of an older woman, as if the corners were being pulled to the ground. There was a penetrating, somewhat melancholic look in her eyes. She was wearing sandals, bright blue wool socks, a pleated skirt and a red sports blouse unbuttoned at the neck. Her blond hair had been cut short with a fringe poking out at the neck, which made her look like a boy in need of a haircut. She was, in short, dressed like a member of the Socialist Youth, a crowd I’d never felt very comfortable around. We had a couple of those girls at the office, and I stayed out of their way. But Erica seemed different. That first evening, I got the impression that she dressed this way because she was struggling to accept her own adulthood. Later on, I realized that her clothes were really just the simplest solution for a financial stalemate. But I don’t attach much value to that discovery anymore either.

That night, at Wies’s house, Erica’s life became part of my own. It was a chance encounter, and I have often wondered what my life would have been like if we’d never met. For a long time, I saw myself as a spectator, but I now know that I changed my course for Erica. Whether my life would have been better or happier without her―who knows? I certainly don’t.

Dola de Jong (1911-2003) was a Dutch-American writer. The Tree and the Vine, first published in 1951, is her best known work; she also won the Edgar Allen Poe Award for her mystery The Whirligig of Time, and the City of Amsterdam Literature Prize in 1947 for her novel And the Field Is the World. It was republished in 1979 under the title The Field. Her other works included the children's books The Level Land (1943) and Return to the Level Land (1947), about a Dutch family caught up in the Nazi invasion. --Este texto se refere à edição library.