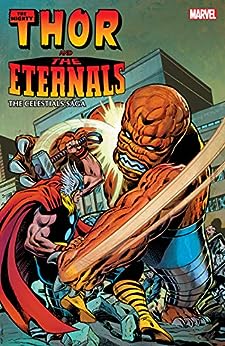 Prepare — the Eternals are coming! Roy Thomas brings Jack Kirby’s Eternals into the Marvel Universe in one of the greatest THOR sagas of all time! The Mighty Thor confronts Odin with questions about Ragnarok, his mother and the threat of the towering cosmic beings known as the Celestials. Odin refuses to reveal the truth, instead sending Thor on a quest for answers. Thor’s journey will bring him face-to-face with the Eternals and reveal the long-hidden secrets of the Marvel Universe! Thus is the stage set for an unbelievable war between gods! Before the dust settles, the Fourth Host of the Celestials will descend on Earth to lay down their judgment — and both human and god may be found wanting.
Leia mais
Previous page
Next page
e-Readers Kindle
Aplicativos de leitura gratuitos do Kindle
Disponível nesses dispositivos

Runmentionable
3,0 de 5 estrelas "Based on the opera by Richard Wagner, as adapted by Roy Thomas"
Avaliado no Reino Unido em 28 de junho de 2021
Compra verificada
The quietly dotty tale collected in this book began in 1978 when Roy Thomas, who pretty much invented comic book continuity in any co-ordinated way, decided to bring Jack Kirby's recently-cancelled (and interesting, if wayward) "Eternals" series into Marvel continuity, to which it had an at best tangential relationship. In order to do so, Roy also brought Marvel's own version of Norse mythology into continuity with "actual" Norse mythology, and to hold it all together, he brought - I kid thee not - Wagner's "Ring" Cycle into Marvel continuity too. He pretty much succeeded in all this. The book may therefore be the Most Roy Thomas Thing Ever.

Conceptually, it kind of works, though it's told at such inordinate length there's no way the book will be of any interest except to people who already have a fondness for Mr Thomas's work and/or the largely underpowered Marvel Comics of the late 1970s. The story began with a prologue in the 1978 "Thor Annual", which kicks off this book, and then worked its way through the regular monthly "Thor" series from issue 283 all the way up to 301. To put that in context, when it started, I was in the lower sixth form, and when it wrapped up, I was halfway through my first term at university, which pretty much counts as an eternity when you're in your late teens.

In those days, every issue of a Marvel comic started with a synopsis of the previous issue (or issues, depending on the complexity of the storyline) and had several pages of obligatory fight scenes which generally did little to advance the plot, so we're already looking at a considerable amount of filler across the 420 or so pages here. Add to that a very complex, and very wordy story, and you have one of the slowest-moving series in comic book history (to the extent that issues 293-299 - seven issues, 119 pages - are essentially one long flashback). At the time, dealing with anxiety over A levels and other teenage crises, it was actually very reassuring to pick up "Thor" every month and find, yup, absoutely nothing's happened, yet again. It was a still, calm place in an otherwise turbulent world. Rereading it all again, 40-plus years on, it remained blissfully placid. The whole thing retains a kind of obsessively-chronicled, long-drawn-out lack of consequence that's strangely charming and rather refreshing in contrast to the pumped-up hysteria of all too many comics since.

That said, in the final two chapters - the double-sized issue 300, and the fun coda in 301 - everything has been set up, matters are resolved and 300 in particular is packed with revelations. Even the action scenes are genuinely exciting, which was almost never the case in comics from this era. It's a long haul to reach this point, but the resolution is genuinely cathartic. Issue 301 is a bit odd. For reasons too complicated to explain, Thor has to carry out a Cook's tour of the realms of all the other mythological pantheons. This results in him having a fight with Shiva on Bifrost, one of those moments of sublime cosmic stupidity that only superhero comics can provide. That said, one does wonder what the world's 1.2 billion Hindus feel about their gods being described as mythical and serving as a punching bag for Thor.

The scripting on the last four stories is handled by Ralph Macchio and Mark Gruenwald, as by this time Marvel editor-in-chief Jim "Lurch" Shooter's plan to dumb down the entire line by making life unbearable for the company's best talent had already seen Roy T. depart for DC. Macchio and Gruenwald carry out a seamless transition, and Gruenwald was even more of a continuity maven than Thomas, so nothing slips by. They even manage to come up with a plausible, sympathetic reason as to why Odin was the biggest d*****d in comics for so many years, and thus why the one-off End of All Things, Ragnarok, came along again every few months. No mean feat.

Most of the art herein is by Keith Pollard, one of the better "house style" Marvel artists from this period, and he also contributes some excellent covers. Unfortunately, his story art is cramped by the complexity of the story, which requires so many panels per page, and so many word balloons per panel, he can't really cut loose. You start to feel that if the story had been told by one of today's "widescreen" artists, the epic scope it so wants to achieve might actually have been delivered. Pollard is inked by Chic Stone, a mixed blessing. Stone's "thick but clean" lines, which worked so well on Kirby in mid-sixties "Thor" when the series was really moving into its early Imperial phase, make Pollard's pencils look very slick and very pretty, but they give the art a fairy-tale appearance which reinforces the feeling that none of this really matters. The "Thor Annual", which kicks it all off, is pencilled by the great Walter Simonson, but don't build your hopes up, because it's inked by Ernie Chan, who seems to have been briefed to make sure nothing that actually looks like Walter Simonson art can be seen on the printed page. There's also a single story illustrated by Pollard's hometown buddy Arvell Jones, who captures his pal's style so effectively you'd never notice the change unless you'd been paying attention to the credits. And the main story arc kicks off with three chapters by John Buscema, the progenitor of Marvel's '70s house style. As was usually the case by Buscema at this point, his work is phoned-in hackwork, but his natural drawing ability was so strong that Buscema's phoned-in hackwork still looks better than some artists' career peaks.
The production values are okay. The book's in the same format as Marvel's "Epic Collection" series. The high-grade matt paper stock holds the original colouring well, and there's a few inessential extras to pad out the last few pages.

Overall, this is a bit of an oddity, and though it has a strange charm, at least to comic book readers of a certain age, it's so flawed that I couldn't honestly give it more than three stars. I'm far fonder of it than that rating would suggest, but much of that is due to nostalgia. I suspect the book will only appeal to people who already know they'll like it, and if that's you, you probably knew that before reading this review, but its charms will be inexplicable, if not undetectable, to pretty much anyone else.

PS if anyone's interested in reading a rather less silly comic book adaptation of Wagner's "Ring", the excellent P. Craig Russell version published by Dark Horse in 2014 is worth hunting down.

🏈#21 Coach K🏈
1,0 de 5 estrelas Book Ruined
Avaliado nos Estados Unidos em 22 de fevereiro de 2021
Compra verificada
I was so excited for my Thor and the Eternals book to arrive and was EXTREMELY DISAPPOINTED when it showed up bent and just destroyed. As a comic book collector and fan, I keep all my books in prestine condition and seeing this book damaged was really upsetting. Purchase with extreme caution!!!
Ler mais

1,0 de 5 estrelas Book Ruined
Avaliado nos Estados Unidos em 22 de fevereiro de 2021
I was so excited for my Thor and the Eternals book to arrive and was EXTREMELY DISAPPOINTED when it showed up bent and just destroyed. As a comic book collector and fan, I keep all my books in prestine condition and seeing this book damaged was really upsetting. Purchase with extreme caution!!!
Imagens nesta avaliação

David Waweru
4,0 de 5 estrelas Eternal No More
Avaliado nos Estados Unidos em 4 de setembro de 2021
Compra verificada
A valid attempt to bring the children of the King (Kirby), into the mainstream of Marvel. Thor's quest for answers takes use on a journey of enlightenment in regards to the pantheon of the Gods of Marvel. This book has everything, War between the Gods, Celestials, dwarfs and man. With the Eternals new movie coming out soon. This will give you some insight into where the MCU maybe heading.
Ler mais
1 pessoa achou isso útil
Informar abuso
Traduzir avaliação para Português

Dr Who Regenerated
5,0 de 5 estrelas The End of the God's and the Death of the Earth!
Avaliado nos Estados Unidos em 19 de novembro de 2021
Compra verificada
Before you read this collection, be sure you have read Jack Kirby's original Eternals collection. As this collection picks up his story at the point he ended his.

My one complaint is the overly long section that turns Thor's story into Richard Wagner's "Der Ring des Nibelungen".