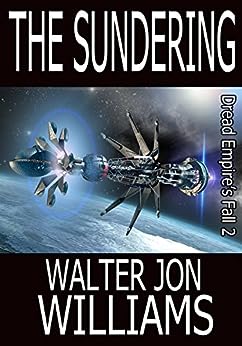 “Walter Jon Williams has succeeded in creating the perfect contemporary space opera, revved up and ready to take the SF genre by force with all the artistry and panache one could ask for.”
--Enigma

“This is a hugely fun ride. It has empires crashing, civil wars, aliens, humans, scheming clans, plucky young heroes and villains fighting battles in huge starships--- what more can you ask for?”
--Alien Online


The Empire of the Shaa has collapsed into civil war. The alien Naxids, striving for dominion, have already won a massive victory, and stand ready to take the capital.

Two star-crossed lovers, the young officers Gareth Martinez and Caroline Sula, have developed a plan to thwart Naxid rule, but first they must overcome the opposition of the entrenched political establishment, as well as their own distrust of one another. Only then can they enter combat, and try to reunite the sundered empire.

“Walter Jon Williams has been compared to writers as diverse as Patrick O’Brian and Jane Austen; both comparisons, bizarrely, make sense. This is classic space opera, elegantly written and beautifully plotted.”
--Guardian

The Dread Empire of the Shaa is no more, following the death of the last oppressor. But freedom remains elusive for the myriad sentient races enslaved for ten centuries, as an even greater terror arises. The Naxids--a powerful insectoid species themselves subjugated until the recent Shaa demise--plan to fill the vacuum with their own bloody domination, and have already won a shattering victory with superior force and unimaginable cruelty. But two heroes survived the carnage at Magaria: Lord Gareth Martinez and the fiery, mysterious gun pilot Lady Caroline Sula, whose courageous exploits are becoming legend in the new history of galactic civil war. Yet their cunning, skill, and bravery may be no match for the overwhelming enemy descending upon the loyalist stronghold of Zanshaa, as the horrific battle looms that will determine the structure of the universe--and who shall live to inhabit it--for millennia to come.

The Dread Empire of the Shaa is no more, following the death of the last oppressor. But freedom remains elusive for the myriad sentient races enslaved for ten centuries, as an even greater terror arises. The Naxids--a powerful insectoid species themselves subjugated until the recent Shaa demise--plan to fill the vacuum with their own bloody domination, and have already won a shattering victory with superior force and unimaginable cruelty.

But two heroes survived the carnage at Magaria: Lord Gareth Martinez and the fiery, mysterious gun pilot Lady Caroline Sula, whose courageous exploits are becoming legend in the new history of galactic civil war. Yet their cunning, skill, and bravery may be no match for the overwhelming enemy descending upon the loyalist stronghold of Zanshaa, as the horrific battle looms that will determine the structure of the universe--and who shall live to inhabit it--for millennia to come.

Walter Jon Williams is a New York Times bestselling author who has been nominated repeatedly for every major sci-fi award, including Hugo and Nebula Awards nominations for his novel City on Fire. He is the author of Hardwired, Aristoi, Implied Spaces, and Quillifer. Williams lives near Albuquerque, New Mexico, with his wife, Kathleen Hedges.

The defeated squadron was locked in its deceleration burn, the blazing fury of its torches directed toward the capital at Zanshaa. Bombardment of Delhi groaned and shuddered under the strain of over three gravities. At times the shaking and shivering was so violent that the woman called Caroline Sula wondered if the damaged cruiser would hold together.

After so many brutal days of deceleration, she didn'tmuch care if it did or not.

Sula was no stranger to the hardships of pulling hard gee.She had been aboard the Dauntless under Captain LordRichard Li when, a little over two months ago, it had joinedthe Home Fleet on a furious series of accelerations thateventually flung it through a course of wormhole gates towardthe enemy lying in wait at Magaria.

The enemy had been ready for them, and Sula was nowthe sole survivor of the crew of the Dauntless. Delhi, theheavy cruiser that had pulled Sula's pinnace out of thewreckage of defeat, had been so badly damaged that it was aminor miracle it survived the battle at all.

All six survivors of the squadron were low on ammunition,and would be useless in the event of a fight. They had todecelerate, dock with the ring station at Zanshaa, take onfresh supplies of missiles and antimatter fuel, then commenceyet another series of accelerations to give them the velocitynecessary to avoid destruction should an enemy arrive.

That meant even more months of standing up under three or four or more gravities, months in which Sula would experiencethe equivalent of a large, full-grown man sitting onher chest.

The deceleration alarm rang, the ship gave a series oflong, prolonged groans, and Sula gasped with relief as theinvisible man who squatted on her rose and walked away.Dinnertime, a whole hour at a wonderfully liberating 0.6gravities, time to stretch her ligaments and fight the painfulknots in her muscles. After that, she'd have to stand a watchin Auxiliary Command, which was the only place she couldstand a watch now that Command was destroyed, along withDelhi's captain and a pair of lieutenants.

Weariness dragged at her eyelids, at her heart. Sula released the webs that held her to the acceleration couch andcame to her feet, suddenly light-headed as her heart tried tomake yet another adjustment to her blood pressure. Shewrenched off her helmet -- she was required to spend timesof acceleration in a pressure suit -- and took a breath of airthat wasn't completely saturated by her own stink. Sherolled her head on her neck and felt her vertebrae crackle,and then peeled off the medicinal patch behind her ear, theone that fed her drugs that better enabled her to stand highgravities.

She wondered if she had time for a shower, and decidedshe did.

The others were finishing dinner when, in a clean pair ofborrowed coveralls, Sula approached the officers' tablewhile sticking another med patch behind her ear. The officersnow ate in the enlisted galley, their own wardroom havingbeen destroyed; and because their private stocks of foodand liquor had also been blown to bits they shared the enlistedfare. As the steward brought her dinner, Sula observedthat it consisted entirely of flat food, which is what happenedto anything thrown in an oven and then subjected tofive hours' constant deceleration at three gravities.

Sula inhaled the stale aroma of a flattened, highly compressed vegetable casserole, then washed the first bite downwith a flat beverage -- the steward knew to serve her waterinstead of the wine or beer that were the usual dinner drinkof the officer class.

Lieutenant Lord Jeremy Foote was in the chair oppositeher, his immaculate viridian-green uniform a testament tothe industry of his servants.

"I bathed, my lord," Sula said. "You might try it sometime."

This was a libel, since probably Foote didn't enjoy livingin his own stench any more than she did, but her wordscaused the acting captain to suppress a grin.

Sula's heart gave a little sideways lurch at the mention ofMartinez's name, and she hoped her reaction hadn't showed.She was in the process of composing a reply when the actingcaptain, Morgen, interrupted.

"Martinez?" he said. "Martinez of the Corona?"

"Indeed yes," Foote said. His drawl, which spoke of generationsof good breeding and privilege, took on a maliciousedge, and it was carefully pitched to carry to the next tableof recruits. "He sends messages to our young Sula nearlyevery day. And she replies as often, passionate messagesfrom the depth of her delicate heart. It's touching, great romancein the tradition of a derivoo singer."

Sula didn't know why this revelation was supposed to beembarrassing: Lord Gareth Martinez was one of the few heroes the war had produced, at least on the loyalist side, and unlike most of the others was still in the realm of the living.

Sula ate a piece of flattened hash before replying, andwhen she did she pitched her voice to carry, as Foote haddone. "Oh, Martinez and I are old friends," she said, "but my Lord Lieutenant Foote is always inventing romances for me.It's his way of explaining why I won't sleep with him."

That one hit: she saw a twitch in Foote's eyelid ...

Continues...
Excerpted from The Sunderingby Williams, Walter Jon Excerpted by permission.
All rights reserved. No part of this excerpt may be reproduced or reprinted without permission in writing from the publisher.
Excerpts are provided by Dial-A-Book Inc. solely for the personal use of visitors to this web site. --Este texto se refere à uma edição esgotada ou disponível no momento.
Leia mais

Targle
5,0 de 5 estrelas Awesome
Avaliado no Reino Unido em 19 de fevereiro de 2017
Compra verificada
I first read this series about 5 years ago, this is my second reading, and it feels as though it has had a massive rewrite since then. I don't know whether it really has or not though.

The thing is it's scope is so massive, the characters so involving and the ideas so detailed and carefully constructed, I think I've just reimagined a lot of the details.

It is the kind of story that I have gone back to in my memory time and again, it's literally changed how I read science fiction.
Ler mais
Informar abuso
Traduzir avaliação para Português

C. S. Barlow
4,0 de 5 estrelas Death at a -Vast!- Distance!
Avaliado no Reino Unido em 19 de junho de 2017
Compra verificada
Continued excitement, though lacking in the darker edge the girl's past offered in the first book. More military SF than Space Opratic SF, this is an assured page-turner (though I do wish his aliens were more... alien). And still -and happily- very Aubrey/Maturin! Would make a good film trilogy or TV series, if somebody would only stump up the necessary budget.
Ler mais
Informar abuso
Traduzir avaliação para Português

M. King
2,0 de 5 estrelas A severe dip in form
Avaliado no Reino Unido em 15 de julho de 2017
Compra verificada
Only real action was in the last 20% of the book.

The rest of it seemed to be social manoeuvres, the dreary story of our star crossed lovers and our heroes coming up with the kind of "genius" ideas that no-one else ever seems to have thought of.