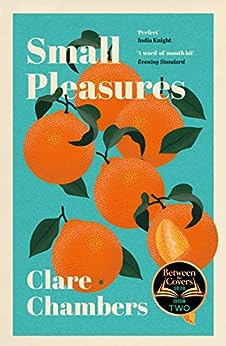 Clare Chamber's first job after reading English Literature at Hertford College, Oxford, was working for Diana Athill at Andre Deutsch. Clare's first novel UNCERTAIN TERMS was published by Diana at André Deutsch in 1992 and she is the author of five other novels.
SMALL PLEASURES, her first work of fiction in ten years, became a word-of-mouth hit on publication and was selected for BBC 2's 'Between the Covers' book club.

SusannahB
4,0 de 5 estrelas A Warm and Involving Story
Avaliado no Reino Unido em 31 de julho de 2020
Compra verificada
I have read and enjoyed all of Clare Chambers' previous novels, so I was looking forward to this new title and I’m pleased to say that I was not disappointed. Set in 1957 in the south-east suburbs of London, 'Small Pleasures' introduces us to thirty-nine-year-old Jean Swinney, an unmarried features writer for the North Kent Echo, who admits to being rather plain and who lives with her rather demanding and somewhat neurotic widowed mother. When the newspaper is contacted by Gretchen Tilbury, a young woman who claims that her ten-year-old daughter, Margaret, is the result of a virgin birth, it is Jean who is appointed to follow up the story. Despite Jean’s initial misgivings, she is soon drawn into the lives of the Tilbury family - the friendly, attractive Gretchen, her kind, older husband, Howard, and the very engaging young Margaret - all of whom welcome the lonely Jean into their home and all of whom, in different ways, Jean becomes very fond. Supporting Gretchen and Margaret through the ordeal of the medical tests and investigations that are needed to substantiate Gretchen’s claim, Jean grows even closer to the Tilburys - but is Gretchen telling the truth? And if she isn’t, what does she have to gain by her deception? There is a lot more to this involving story than I have mentioned here, but to reveal more would spoil it for those who have yet to read it.

A perceptively observed story which looks at the quiet, orderly life of a woman who is single not from choice, but from a lack of opportunity in finding the right man to marry, and who has to make do with the small pleasures of life amongst all of the mundanities. The author portrays well the suffocating effect that Jean's mother has on her daughter and how difficult it is for Jean to break free from her mother’s dependence on her and the resultant guilt she experiences when she does manage to get some time to herself. Ms Chambers also describes well the time period she has set her story in (I wasn’t alive in 1957, but the author's writing certainly appears very evocative of that time) and although, for the most part, this is essentially a gentle and slow-moving story, there are aspects to it that keep the reader guessing until the end and I was engaged from the first page to the last. A warm, involving and enjoyable read and one I would recommend.

Lilac Lamb
5,0 de 5 estrelas Couldn't put it down!
Avaliado no Reino Unido em 1 de agosto de 2020
Compra verificada
I have found it very hard to read novels during lockdown due to problems with concentration. However, I had no difficulty at all in reading this novel! I was sucked in from the first page and read the novel in two long summer afternoons in the garden! I live in the area where the novel is set, and it remains largely unchanged, so I can picture the locations. This novel is structured in such a way that you just want to read on, to see what happens next! The characters are beautifully written and their inner lives are richly evoked in the context of the petty restrictions of suburban England in the 1950's.
Ler mais
67 pessoas acharam isso útil
Informar abuso
Traduzir avaliação para Português

Eleanor
2,0 de 5 estrelas Sort of nice but unsatisfying
Avaliado no Reino Unido em 1 de novembro de 2020
Compra verificada
A nice read. Sort of. I found the virgin birth storyline very predictable and was just waiting for that to unravel - there were too many clunky references to the fact that Gretchen was regularly dosed up on too many sleeping pills.
I also found the end jarring. And perhaps just plain cruel to the characters and the reader - I’m not sure what purpose it really gave other than for us to realise that poor Jeans life would continue to be “bleak” in her own words.
No idea how the two true stories link together either. That could have been done much more sophisticatedly. A shame, this book had promise and I enjoyed parts. On reflection 3 stars is too generous so I’ve dropped to two!
Ler mais
55 pessoas acharam isso útil
Informar abuso
Traduzir avaliação para Português

Misty
3,0 de 5 estrelas Amazing novel ... until it wasn’t.
Avaliado no Reino Unido em 25 de outubro de 2020
Compra verificada
The first two-thirds of this novel are stunning: a stunningly well-drawn portrait of restricted lives and stifled desires with a beautiful feeling of sense and place. The characters are so rounded and vivid I could not shake the image of Mark Rylance playing the role of Howard, if - and when - Small Pleasures is ever brought to the screen. The final third of the novel however was a crashing disappointment with tropes, a lazy-sounding ‘twist’ and an ending so disappointingly abrupt and sad that all it made me think of is here is an author desperate to be shortlisted for a literary prize rather than one invested enough in her characters and readers to gift them at least with a hopeful ending rather than the utter misery promised for all the characters, even little Margaret and her ‘angel voices.’ I don’t often write reviews but I feel so cross that a novel that could’ve been a modern classic fizzled so badly.
Ler mais
48 pessoas acharam isso útil
Informar abuso
Traduzir avaliação para Português