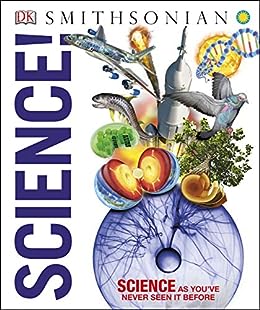 I am very happy to say that Science is probably the best book of the the entire series. It is packed with information, both technical and historical, and does an excellent job of explaining the complex in diagrams and text. My science-loving son was enthralled, and eager to read more of it.

Best of all was the reference section near the back of the book, which summarises a great deal of human knowledge in a few pages - and includes the equations on which science is built. I can't find fault with this book, and it certainly deserves much recommendation!

Frank D
5,0 de 5 estrelas Few would not learn something new from this utterly engrossing tome...
Avaliado no Reino Unido em 13 de novembro de 2011
Compra verificada
DK over the years has perfected the pictorially driven, graphically sumptuous genre of reference type books, and this glorious book is a supreme example.

Captured between these covers is the simplified sum of man's scientific understanding of nature, life and the universe - stunningly presented with thousand of photos, cut-away diagrams and thoughtful full-colour illustrations, backed-up with comprehensible and useful text.

Typically, the book teems with time-lines, info-boxes and cameo pieces which help fill the gaps usually ignored by standard treatments, and help fix the knowledge in one's mind.

DK is also to be credited with treating science as a human story as well, giving welcome space to the personal details of the thousands of men (and women) across the ages, who with extraordinary ingenuity and perseverance have unlocked Nature's secrets - arguably mankind's greatest achievement.

Inevitably on such a vast subject there will be some carping about lack of depth and detail, and a bias (PC?) in material selection which seems to short-change the German contribution in favour of a wider spread of individuals from other nations.....for which as a payoff, I learnt about Spanish scientists (to name only one group) that I had never even heard of.....

In an instance of un-PC contrast though, Einstein's wife Mileva who apparently did the maths and co-authored several of his early papers, still remains unacknowledged even here, in one imagines is deference to the image of the icon....

But all this is a pretty trifling detraction from what is overall a brilliant, entertaining, enlightening and beautifully presented book.

R.E.Hastings
5,0 de 5 estrelas A splendid inspiring volume
Avaliado no Reino Unido em 7 de abril de 2015
Compra verificada
This is not a just a good book:it is an utterly magnificent book! It looked good on the Amazon web site but when I actually got it I was immediately enthralled. There was ‘nothing’ on TV that night so I curled up in a comfy chair and began to dip in at random. Then I followed themes: steam, electricity, chemistry and the structure of atoms and so on. I continue to be completely absorbed in it. This must be one of the most complete general science books ever compiled. It is by no means a text book but it is a highly inspiring book which can stimulated the reader to dig deeper elsewhere on a particular subject once their interest has been sparked. Anybody with the remotest interest in ‘science’ (10 years of age +) would be delighted with it. DK produce splendid books but with this volume they have exceeded themselves.
Ler mais
4 pessoas acharam isso útil
Informar abuso
Traduzir avaliação para Português

zx50
5,0 de 5 estrelas Yet Again, An Amazing Book From DK
Avaliado no Reino Unido em 30 de outubro de 2010
Compra verificada
This book is utterly amazing! It's absolutely packed FULL of all the scientific knowledge your brain could ever need to take in. I've browsed through the book and know that I'm going to love this once I start reading it. I don't know whether these could be a COMPLETE substitute for other books (bit of a contradiction here, I know), but by hell, they come very close though. Anyone wanting to know about science, DEFINITLEY get this. I'm so pleased I did.
Ler mais
10 pessoas acharam isso útil
Informar abuso
Traduzir avaliação para Português