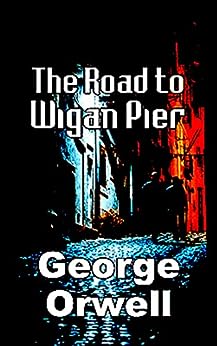 Although George Orwell grew up in the relative comfort of the English middle class, his socialist convictions and general sense of fairness led him to hate his country's deeply ingrained class structure. That perspective permeates this book, but the most striking elements are the quotidian details of life that Orwell observes in his first-person account of the lives of coal miners and others in the poor north of England. Wigan Pier is almost too realistic at times, as Orwell brings his unparalleled powers of observation to portray the wretched conditions of the working class. That Orwell may have slanted his reporting to make things look worse than they were is a question that does not lessen the book's interest. --Este texto se refere à uma edição alternativa kindle_edition

George Orwell (1903-1950), the pen name of Eric Arthur Blair, was an English novelist, essayist, and critic. He was born in India and educated at Eton. After service with the Indian Imperial Police in Burma, he returned to Europe to earn his living by writing and became notable for his simplicity of style and his journalistic or documentary approach to fiction.

Maria
4,0 de 5 estrelas You can have a lovely day with Wigan Pier
Avaliado no Reino Unido em 14 de junho de 2018
Compra verificada
Even the most ardent George Orwell fan would admit that this book would do well with some editing. "The Road to Wigan Pier" is essentially two books, the first is an account of life in the industrial midlands and north. In this section it is unflinching in its account of the poverty and desperation which drives people to actions such as risking their lives in the mines. The section on how when a man dies in the mines, all the other men contribute money from their wages to the widow is harrowing. That simple fact that it happens so often there is a stamp for it is shocking in the extreme.

The second half is an interesting, often funny account of why people are turned off the socialist cause. I had many a moment where I laughed out loud, particularly at these kind of quotes:

"It would help enormously, for instance, if the smell of crankishness which still clings to the Socialist movement could be dispelled. If only the sandals and the pistachio-coloured shirts could be put in a pile and burnt, and every vegetarian, teetotaller, and creeping Jesus sent home to Welwyn Garden City to do his yoga exercises quietly! But that, I am afraid, is not going to happen."

"The truth is that, to many people calling themselves Socialists, revolution does not mean a movement of the masses with which they hope to associate themselves; it means a set of reforms which 'we', the clever ones, are going to impose upon 'them', the Lower Orders."

Whether you agree or not, you have to admit at times Orwell had a point and that point persists today.

As I indicated, the structure of the book feels a bit clunky though. My advice is not to read the forward before reading the book but to read it afterwards. It gives away a lot of the structure and how it was received which I preferred to think about after the event. The reason for the lack of an editing eye was Orwell had left for the Spanish Civil War just before publication.

One thing I would say is you don't have to be hard left to read Orwell, in fact he's as critical of the hard left as he is of capitalism. Also Orwell is really easy to read and you feel like you've read something of note every time you read one of his books.
Ler mais
58 pessoas acharam isso útil
Informar abuso
Traduzir avaliação para Português

Chris
2,0 de 5 estrelas Orwell's text is great - this Kindle edition isn't
Avaliado no Reino Unido em 17 de julho de 2020
Compra verificada
I'm loathed to give the book 2 stars. I love Orwell's work and this one is no exception. Orwell's experience in a coal mining village and his first-hand account of poverty is gripping. However, this Kindle edition is shocking. There are letters missed out and works incorrectly hyphenated. Consider the Gutenberg edition or the paperback edition instead of this one.
Ler mais

2,0 de 5 estrelas Orwell's text is great - this Kindle edition isn't
Avaliado no Reino Unido em 17 de julho de 2020
I'm loathed to give the book 2 stars. I love Orwell's work and this one is no exception. Orwell's experience in a coal mining village and his first-hand account of poverty is gripping. However, this Kindle edition is shocking. There are letters missed out and works incorrectly hyphenated. Consider the Gutenberg edition or the paperback edition instead of this one.
Imagens nesta avaliação

tallmanbaby
4,0 de 5 estrelas classic essays on the industrial north
Avaliado no Reino Unido em 25 de novembro de 2017
Compra verificada
This is a vivid and affecting account of the bleak lives of the working class in the industrial north of England. The first half is a set of essays, the first one is on life in a tripe shop come boarding house and is an object lesson in how to write, as is the superb account of working in a coal mine.

By modern standards the structure is probably rather shambolic, and it is stronger on personal experience than evidence, but as a writer, Orwell has the ability to just vanish and let the lives of those he is describing come fully alive before you.

The second half was not originally published, and it is easy to see why. It is part debate, part rant, about his desire for the rise of socialism. He takes swipes at all and sundry, from nouveau Catholics, to sandal wearing lefties and Quakers in their garden cities. He debates the attractiveness of the English physique and whether the working class smell. Despite this, he comes across as sincere, well intentioned, and uncannily astute on a great many things.

After this, Orwell headed off to fight in the Spanish civil war, and he is surely one of the most impressive Britons of the twentieth century.

JRF
5,0 de 5 estrelas Superb non-fiction from George Orwell
Avaliado no Reino Unido em 3 de julho de 2017
Compra verificada
If you enjoyed "1984" and "Animal Farm", and want to read more of Orwell's superb prose, this work of non-fiction is unlikely to disappoint. In the first part, the author pulls no punches in his searing description of the appalling conditions in which many North of England working class people lived between the two world wars. The second part is a sympathetic survey of socialism - a system Orwell would later turn strongly against. Being very much rooted in how things looked at the time, this part is perhaps less accessible to modern readers, but is certainly of historical interest.

Kevin Adams
5,0 de 5 estrelas Often rings as true today as it did when it was written
Avaliado no Reino Unido em 13 de outubro de 2017
Compra verificada
Where is our contemporary Orwell? Writers brave enough to step outside their comfortable lives and experience a world at odds with their upbringing are few and far between?

Orwell is brutally honest and admits his prejudice towards the working class, then immerses himself in his search to find out how class divides us!

His bewilderment at Socialist "food cranks" and "sandal wearers" is often amusing from our modern perspective.