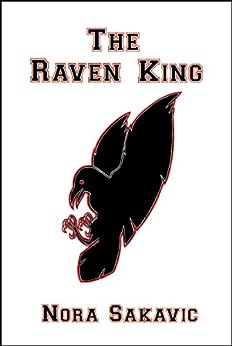 Nora Sakavic is the author of the All for the Game series, which includes The Foxhole Court, The Raven King, and The King's Men.

Alexander Cendese is a New York-based actor and narrator whose credits include roles on and off Broadway, in films, and on popular television shows, including Law & Order: SVU and All My Children. He holds a BFA from the Carnegie Mellon School of Drama.

RenataTFaria
5,0 de 5 estrelas Breathtaking
Avaliado no Brasil em 6 de outubro de 2019
Compra verificada
Again, I think I don’t have the right words to describe the wonderful feelings this series give to me. You will cheer the foxes all along the way, be sassy with them, cry with them, laugh with them. Once a fox, always a fox. Go foxes!
Ler mais
1 pessoa achou isso útil
Útil
Informar abuso
Traduzir avaliação para Português

zaheerah
4,0 de 5 estrelas fascinating
Avaliado no Reino Unido em 10 de abril de 2018
Compra verificada
As I mentioned in a previous review, I wasn't a huge fan of the first book and I was seriously considering not continuing the series. But I'm so glad I continued because Nora Sakavic doesn't disappoint in this sequel. The Raven King picks up straight after the events of book 1, continuing the story of Neil and the Foxes as move forward with the game season, counting down the days until they have to face the Ravens. Alongside this, Neil struggles with hiding his past and keeping it together in the presence of Riko's menace.

The way Sakavic writes is really simple, not too OTT, considering the events of the novel which is what made it really nice to read. It's fast-paced but not in a way that leaves you confused as she reveals more about the characters and their determination in the rough world of Exy. The characters are developing, as are their relationships, and it's fascinating but you do find yourself having to stop and think about who is who with some of the other team members, but I was so focused on Neil and Andrew that didn't bother me as much as it did in the first book.

Also, Neil's one of those characters that you just want to pick up from their novel and place them somewhere safe. BECAUSE SO MUCH BAD STUFF HAPPENS AND HE JUST DOESN'T DESERVE ANY OF IT.
Ler mais
1 pessoa achou isso útil
Informar abuso
Traduzir avaliação para Português

555
4,0 de 5 estrelas Book 2 of 3
Avaliado no Reino Unido em 14 de setembro de 2016
Compra verificada
The continuation of the first book, The Raven King - Better than another of the same name in my opinion - carries on with the action. I was already becoming attached to the characters in the first book and this book made that attraction stronger with every word.

Considering this series has been described as M/M, Sakavic has been quite subtle with it (apart from the very out and proud Nicky who is wonderful). The subtext is fantastic and in places, made me smile while in others, made me well up. The emotion is thick in this book and that's what drew me to the characters. The female characters in this second book are shown more in how strong they are. They're all so different and have their own issues, but they deal with them in a mature way.

Even though, as with The Foxhole Court this book is told from Neil's POV, yet Sakavic lets the reader learn about his teammates (and tentative friends) alongside him, and she does this very well. Throughout this book, Renee and Nicky were my favourites, but Andrew, Neil, and Kevin are up there too.

We also meet more of the Ravens, and I have to admit that they're (mostly) not at all likeable. They are ruled by Riko's iron fist, and although they're one of the best teams, they are not remotely relateable. That becomes even clearer towards the end of the book when Neil is forced to spend time with them... That's when I really began to read with my heart in my mouth.

Again, not a 5* rating because of the lack of control Coach Wymack seems to have over his team and the way he doesn't involve himself in their lives more and reign them in.
Ler mais
2 pessoas acharam isso útil
Informar abuso
Traduzir avaliação para Português

Barbara I.
5,0 de 5 estrelas Great continuation - 100% not for the weak-hearted
Avaliado no Reino Unido em 22 de agosto de 2018
Compra verificada
Continuing from where it was left off in book 1 and honestly, you need to prepare your heart so much more than you did for book 1.
And it is such a wonderful continuation that lets us get the characters know more but also get more insight of all the bad stuff going on and also, SO MUCH BAD THINGS HAPPEN THAT WILL MAKE YOU CLENCH YOUR HEART AND SAY "please stop hurting my children".
The events will haunt you, or at least they haunted me, however, this book also make the characters grow on me more.
Absolutely loved it.
Ler mais
2 pessoas acharam isso útil
Informar abuso
Traduzir avaliação para Português

Amazon Customer
2,0 de 5 estrelas It's not that great......
Avaliado no Reino Unido em 1 de novembro de 2018
Compra verificada
I really don't understand how this series gained a rather cult-like fan base on certain social media sites...

It's clear the author is not experienced, the writing flow is clunky and clumsy.

Plotwise there was some potential but rather than be shocked by some of the twists and turns, most of the time I was simply rolling my eyes at how ridiculous it all was. It's kind of like reading the book equivalent of a corny, melodramatic soap opera that tries to take itself too seriously by loading up on every edgy trope imaginable. It attempts to shock with cartoonish violence and tries to fill in it's own plot holes by distracting with yet even more angst~

In truth, I made it to the second book because some of the characters were intriguing and again, had potential, but I won't be reading the third. It's just too badly put together. If you're an avid tumblr user, deep in the worlds of fan fiction and fandoms, I can kind of understand why this might appeal, but as a stand alone series of original fiction, objectively it's not that great and I wanted to write this review to give what seems like a more unbiased opinion. Also, it's often described as a romance but it's truly a blink-and-you'll-miss-it type so don't go in expecting any of that.
Ler mais
1 pessoa achou isso útil
Informar abuso
Traduzir avaliação para Português

purpleshaz
5,0 de 5 estrelas Sporting drama 2
Avaliado no Reino Unido em 2 de janeiro de 2014
Compra verificada
Another brilliant if little strange story. We continue to get more back stories about the dysfunctional team The Foxes. when one of the team die the rest start to pull together on and off the court. A couple of clashes with the top team, The Ravens, builds the animosity between the 2 teams but sadly this book does not make it to end of season. I can feel the tension building up to the final match between Foxes and Ravens. If u have seen mighty ducks, Youngblood, Rocky, karate kid u can see the build up as the Foxes and Ravens plough their way through the rest of the Class1 teams. I can't wait for book 3 to come out and hopefully get us to the final game where the music starts and builds until they get to the final minutes of the game everyone tired near to dropping and the final pep talk before heading back to starting places and the end of game begins. Maybe I watch too many films but this is how this book makes me feel. Come on Nora put me out my misery and give me book 3.
Ler mais
2 pessoas acharam isso útil
Informar abuso
Traduzir avaliação para Português
Visualizar todas as avaliações
Voltar ao início
Conheça-nos
Ganhe dinheiro conosco
Deixe-nos ajudá-lo
Pagamento
E não se esqueça:
© 2012-2021, Amazon.com, Inc. ou suas afiliadas