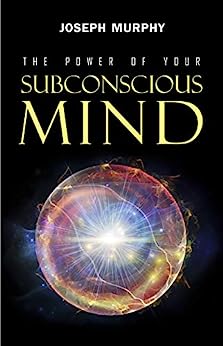 The Power of Your Subconscious Mind (English Edition) eBook Kindle

Joseph Murphy, PhD, DD (1898-1981) was a world-renowned authority on mind dynamics and author of numerous bestselling books. His ability to provide practical techniques that anyone can use as a tool for physical, social, economic, and spiritual self-improvement gained him a loyal worldwide following of millions. He wrote, taught, counseled, and lectured to thousands over a fifty-year career. He was the minister-director of the Church of Divine Science in Los Angeles for twenty-eight years, where his lectures were heard by thousands every week. Among his dozens of books are The Power of Your Subconscious Mind, Think Yourself Rich, Believe in Yourself, and many others. A renowned authority on mysticism and mind dynamics, his work continues to influence followers worldwide.

Timothy Andrés Pabon is an English- and Spanish-speaking voice-over artist who has worked extensively in advertising and audiobook narration. He has had acting roles on House of Cards and has also been a costar on HBO's acclaimed series The Wire opposite country music legend Steve Earl. As a stage actor, he has worked off-Broadway at the June Havoc Theatre, and his regional credits include Center Stage, the Shakespeare Theatre, Arena Stage, the Hippodrome, Olney Theatre, Rep Stage, and GALA Hispanic Theatre.

Karina Carnelossi
5,0 de 5 estrelas A personal development classic
Avaliado no Brasil em 1 de outubro de 2019
Compra verificada
This book must be read by those who search to expand consciousness. I had already read the portuguese version. I just wanted to read the original one. Really fantastic. To be read and reread as many times as possible.
Ler mais
7 pessoas acharam isso útil
Útil
Informar abuso
Traduzir avaliação para Português

Vinni Santana
4,0 de 5 estrelas Open your eyes
Avaliado no Brasil em 21 de dezembro de 2020
Compra verificada
This book was an eye opener for me. I've always been a pessimist and it shows how dangerous ill thoughts can be.
Sometimes it may feel too pushy or fantastic, but it's certainly a good read and might give you some great insights about life.
Ler mais
1 pessoa achou isso útil
Útil
Informar abuso
Traduzir avaliação para Português

sugarbelle
2,0 de 5 estrelas Not what I was expecting
Avaliado no Reino Unido em 28 de julho de 2019
Compra verificada
I should have read the blurb, but I thought this book was going to be a study of how the subconscious mind works from a psychiatric point of view. It is not, it is a self-help book on the power of positive thinking. It was not for me and so I did a 'speed read', flicking through chapters on for instance 'your right to be rich' (you can think yourself rich apparently), and also details of how crippled and blind people have been cured with positive thinking. I found it all rather far-fetched. I read similar positive thinking books in my youth and tried them out to no great effect, I am older and more cynical now and find such books off-putting now. But don't let me put you off, it might help you, but I can't recommend it.
Ler mais
24 pessoas acharam isso útil
Informar abuso
Traduzir avaliação para Português

Mr OdinSon
1,0 de 5 estrelas Only book I NEVER finished.
Avaliado no Reino Unido em 3 de janeiro de 2021
Compra verificada
I think I have read somewhere near to 500 books over the last decade or so. I have read some absolute stinkers in that time I can tell you. Yet, I have always seen them through no matter the anguish. I could barely manage 50 pages of this tripe.
This book is not scientific. It relies on tales of way back when, he said she said type Chinese whispers. In the 50 pages I read there was not mention of 1 study. Apparently though, don't ever joke about giving your right arm; your mind will take you at your word and have it from you. What really lost me was the writer describing himself of a skin condition via the power of his mind.
I wonder what was up with all those people who succumbed to deadly disease and illness? I suppose they did not want to live enough, did not have a strong enough will to allow their conscious mind to activate that miracle machine known as the subconscious mind. If only life was this easy. I would have sprouted wings, won the lottery at least 3 times, cured world hunger, ended knife crime, formed my prominent nose into something more easy on the eye and shagged my way to an early, yet satisfying death.

There are much better books available that are based on scientific research that will help with living a more positive and fulfilling life.
Skip this garbage!
Ler mais
7 pessoas acharam isso útil
Informar abuso
Traduzir avaliação para Português

Miss C.
5,0 de 5 estrelas Love this book
Avaliado no Reino Unido em 7 de fevereiro de 2020
Compra verificada
Everyone should read this book. It is truly an eye opener with regards the mind. It makes you realise you have power to control your own mind positively by using your conscious and subconscious brain. It’s quite old but timeless. It gives lots of useful ways to help yourself be free of fears and worries. It has had such a profound effect on me I’m going to read it again soon. Amazed.
Ler mais
8 pessoas acharam isso útil
Informar abuso
Traduzir avaliação para Português

N.B
5,0 de 5 estrelas Life changer
Avaliado no Reino Unido em 19 de abril de 2020
Compra verificada
This book genuinely changed my life in so many ways nd I haven't looked back. I have a hardback copy and I have it on kindle. I recommend everyone READ, FEEL and APPRECIATE this book it's amazing.
Joseph Murphy
Thank you, thank you, thank you.
Ler mais
7 pessoas acharam isso útil
Informar abuso
Traduzir avaliação para Português

IanLN
4,0 de 5 estrelas The message is relevant if not the time in which it was written.
Avaliado no Reino Unido em 12 de abril de 2020
Compra verificada
Not so good: basic editing of the content would have picked up the grammatical errors and disturbances which once spotted distracted from the flow of the reading experience.

The topic - the role of the sub-conscious, or more currently, the unconscious is dealt with succinctly for a book of this type. Context, in which it is written, language used and inferences round spirituality will not appeal to all - however one should look beyond that to the core message i.e. that the unconscious plays a role in behavioral modification. As we think, so we are. Critiques around the book being a religious manifesto and lacking in scientific credence, unfortunately, demonstrates a lack of awareness of the science in the current period. I'd recommend, for a rounded reading and enhanced understanding a simple google os 'the role of the unconscious'
Ler mais
6 pessoas acharam isso útil
Informar abuso
Traduzir avaliação para Português
Visualizar todas as avaliações
Voltar ao início
Conheça-nos
Ganhe dinheiro conosco
Deixe-nos ajudá-lo
Pagamento
E não se esqueça:
© 2012-2021, Amazon.com, Inc. ou suas afiliadas