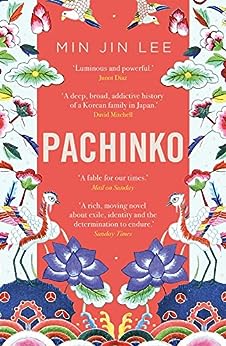 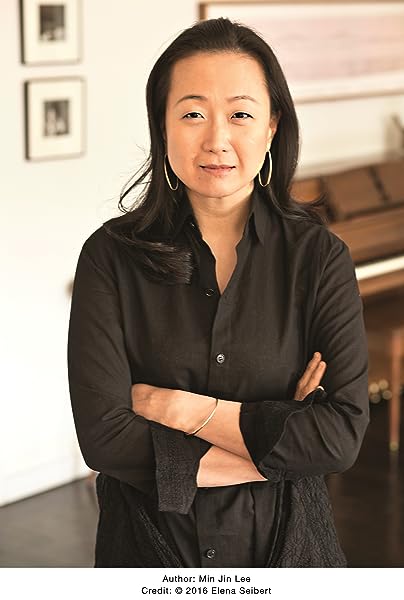 Min Jin Lee is the bestselling author of two novels. Pachinko was a finalist for the National Book Award for Fiction, a New York Times bestseller and was included on over 75 best books of the year lists. It is currently being adapted for television by Apple TV. Lee's debut novel Free Food for Millionaires was a Top 10 Books of the Year for The Times, NPR's Fresh Air and USA Today. Min Jin Lee's writings have appeared in The New Yorker, the TLS, the Guardian, Conde Nast Traveler, The Times and the Wall Street Journal, among others. In 2019, Lee was inducted into the New York Foundation for the Arts Hall of Fame. She serves as a trustee of PEN America, a director of the Authors Guild and on the National Advisory Board of the Immigration Initiative at Harvard.

In a small fishing village on the banks of the East Sea, a club-footed, cleft-lipped man marries a fifteen-year-old girl. The couple have one child, their beloved daughter Sunja. When Sunja falls pregnant by a married yakuza, the family face ruin. But then Isak, a Christian minister, offers her a chance of salvation: a new life in Japan as his wife.

Following a man she barely knows to a hostile country in which she has no friends, no home, and whose language she cannot speak, Sunja's salvation is just the beginning of her story.

In a small fishing village on the banks of the East Sea, a club-footed, cleft-lipped man marries a fifteen-year-old girl. The couple have one child, their beloved daughter Sunja. When Sunja falls pregnant by a married yakuza, the family face ruin. But then Isak, a Christian minister, offers her a chance of salvation: a new life in Japan as his wife.

Following a man she barely knows to a hostile country in which she has no friends, no home, and whose language she cannot speak, Sunja's salvation is just the beginning of her story.

Betina Juchem
5,0 de 5 estrelas Epic and moving
Avaliado no Brasil em 3 de setembro de 2020
Compra verificada
Pachinko is the epic story of people like you and me. Through 4 generations, we learn of the struggle of ordinary koreans that had to immigrate to Japan. It's a tale of hardship, love and family. From the very beginning, it's easy to feel connected to the characters.

But most of all, it's a story about emotional connections. No matter how capable or intelligent you are, without love and support, it's hard to make it in the world. Pachinko shows that with incredible clarity. The value of human understanding is shown many times throughout the story.

EllieF
5,0 de 5 estrelas Please read
Avaliado no Reino Unido em 15 de outubro de 2017
Compra verificada
I bought the Kindle edition of this book as it was a special offer. I hummed and hawed and eventually decided that it was such a low price it didn't really matter if I liked it or not.
I am so pleased I bought this book. It was enthralling - took me less than two days to read. I began by thinking it was going to be a family saga type book (which I normally avoid like the plague) but it was anything but.
I found myself become deeply involved with the characters and wanting to know how they got on, how their various decisions affected their lives. I was actually pleased it is a standalone book as it meant more than the first in a series.
I'd no idea what pachinko was (or, indeed, is) and I vaguely (and incorrectly) thought it would have something to do with food or clothing.
I hadn't realised how the Koreans were treated by the Japanese and had no idea of what they had to undergo in their day to day lives in either Korea or Japan. This book was an education.
Ler mais
109 pessoas acharam isso útil
Informar abuso
Traduzir avaliação para Português

Pu55ycat1
3,0 de 5 estrelas Interesting insight into history but story too long & difficult to keep up with all the characters...
Avaliado no Reino Unido em 4 de agosto de 2018
Compra verificada
For some reason I'm absolutely fascinated by Japan & asian culture so I love reading novels set there. At first I was gripped by this book as it did give a real taste of history & life set in this part of the world... However, by about half way through I was starting to get bored.. The author kept introducing more & more characters whose names & family lineage were very difficult to keep up with & the story was going nowhere. It was kind of interesting to see the history & development of a whole family & Korean & Japanese culture over several generations I just wish there had been a little bit more to the story; each time I became invested in a particular branch of the family story it would change & move onto another & this left a quite dissatisfied feeling...
Ler mais
52 pessoas acharam isso útil
Informar abuso
Traduzir avaliação para Português

Harty
5,0 de 5 estrelas Sad, desolate, but strangely beautiful.
Avaliado no Reino Unido em 28 de novembro de 2018
Compra verificada
I heard Min Jin Lee interviewed and quickly realised that there was a Korean/Japanese history about which I knew virtually nothing.
I understood from the interview that this book took a very long time to write and that it was impeccably researched, so thought it deserved reading. There are a considerable number of characters with Korean and Japanese names and lots of words that need looking up in order to get their full meaning. I didn't even know what 'Pachinko' was and if you don't know you won't find out until about half way through the book - unless you look it up first. These are not criticisms, but I do feel that this book needs a fairly academic approach to get the most out of it. It is not an easy read. Following the lives and 'fortunes' of a Korean family who 'escape' to Japan in order to avoid starvation, it is a story of persecution and prejudice on many levels. If you like a feel-good story this is not for you, but if you can take a big dose of reality and admire the qualities of human spirit and tenacity in adversity then you will find this book both informative and deeply moving.
Ler mais
41 pessoas acharam isso útil
Informar abuso
Traduzir avaliação para Português

Fengirl
4,0 de 5 estrelas A long book but worth the effort
Avaliado no Reino Unido em 4 de outubro de 2018
Compra verificada
An absorbing, distressing and heartwarming saga of 4 generations. Set in the time of the Japanese occupation of Korea this is not an easy read but as well as accounts of poverty, struggle and cruelty there is hope and determination. The Koreans suffer racism, abuse, poverty and loss but this family somehow sticks together for the first two parts of the tale. Part 3 however is a completely different kettle of fish. Was it written by the same person? It is much more sexual than earlier sections , perhaps to show the contrast between wartime and the 70s but I found that the focus on sex and the resultant bad language made this part of the book very shallow
Ler mais
15 pessoas acharam isso útil
Informar abuso
Traduzir avaliação para Português

Amazon Customer
3,0 de 5 estrelas Good book, but hard to finish.
Avaliado no Reino Unido em 16 de julho de 2018
Compra verificada
Read this as it was the May book for my Girly Book Club. Again, another example of one I would not have read on my own, but that's the fun of a book club. The book was very educational, and enlightened me about a time in history I otherwise knew nothing about. I would recommend for this purpose. The first half of the book was very exciting, fast moving and enjoyable. I feel the pace dropped in the second half and the character relationships were difficult to grasp. I had to really persevere to finish this one.
Ler mais
19 pessoas acharam isso útil
Informar abuso
Traduzir avaliação para Português
Visualizar todas as avaliações
Voltar ao início
Conheça-nos
Ganhe dinheiro conosco
Deixe-nos ajudá-lo
Pagamento
E não se esqueça:
© 2012-2021, Amazon.com, Inc. ou suas afiliadas