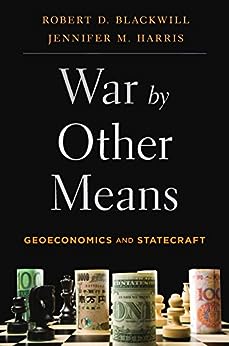 Robert D. Blackwill is Henry A. Kissinger Senior Fellow for U.S. Foreign Policy at the Council on Foreign Relations.

Miles McDonald
3,0 de 5 estrelas Academic Speak to show how America should be more like China
Avaliado no Canadá em 16 de janeiro de 2020
Compra verificada
The book sent shivers down my spine. It opened my eyes to things happening in SE Asia (courtesy of China) and then went on to suggest that America do the same.
Ler mais
Informar abuso
Traduzir avaliação para Português

The authors define geoeconomics (GE) as “the use of economic instruments to promote and defend national interests, and to produce beneficial geopolitical results; and the effects of other nations’ economic actions on a country’s geopolitical goals” (@20). GE is “both a method of analysis and a form of statecraft” (id.), but it is neither geopolitics per se, nor is it foreign economic policy.

To illustrate (examples are mine, not the book's): (1) If geopolitics is “a method of foreign policy analysis that seeks to explain, understand and predict international political behavior primarily in terms of geographical variables” (@24), then relatively speaking it emphasizes the “geo” while GE emphasizes the economics. For example, consider how you might impose more liberal human rights in another country. If you were Napoleon (to the extent his legal system tended to follow his conquests), or perhaps the US in 2003 (to take the then-prevailing narrative about the tyrant Saddam at face value), you’d use military force; whereas if you were taking a GE approach, you might use economic sanctions. (2) To see the difference between GE and foreign economic policy, contrast the case above with one where punitive economic methods, such as a “border tax,” are used not to force human rights improvements, but for coercing the renegotiation of a trade treaty like NAFTA, in order to fix trade imbalances. Use of economic instruments for economic ends isn’t GE.

The authors do acknowledge, though, that the distinctions sometimes get fuzzy, particularly between economic interests and security interests. Again, to illustrate with my own examples: Suppose the US were to repudiate NAFTA, or to impose an economic blockade on Mexico, each on the grounds of getting a “better deal” for the US; and suppose this caused the Mexican economy to collapse. Then an impoverished and angry population on our border could create national security problems, not just economic ones. Conversely, trade that helps maintain economic stability in Mexico can be helpful for improving security. And that seems to be the case: even during the 2016 US political campaign, with its incendiary accusations of criminals coming across the border from Mexico, no one was claiming that *terrorists* from Mexico were contributing to “this American carnage.”

After establishing what GE is and isn’t, the authors next discuss the main instruments of GE: trade policy, investment policy, economic and financial sanctions, cyber attacks, development aid, financial and monetary policy, and energy and commodities. The rest of the book then focuses mainly on the policies of China, Russia and the US. The gist is that China and Russia are very good at using pretty most of the instruments in the GE armory; whereas the US, while it once was proficient at GE, in recent decades has abandoned it in favor of using economic means for economic ends, and military means for geopolitical ends.

This isn’t a fast read at all — every paragraph is a dense thicket of facts. And if facts are fast becoming objects of nostalgia as I write this, that isn’t the only wistful aspect to the book: one of the authors had served as an ambassador under Secretary of State Clinton, who had appeared to be open to restoring a GE perspective to US policy. Perhaps the authors were hoping that this book would help to shape statecraft of the 21st Century Clinton White House. In any case, judging by the early weeks of the Trump Administration, the book’s lessons don’t seem yet to have fallen onto receptive ears: the past segregation of economic means for economic ends and armed means for geopolitical ones looks like it will continue for a while.

But there’s a more important respect in which this book carries resonances of the 2016 election. Usually GE measures are meant to change the behavior of the leaders of the target nation. But what about the impact on ordinary people? The authors never consider at length the effect of economic measures on the general population of the target countries. Their perspective is very aerial and lacking a human touch — exactly the sort of mandarin attitude that made it hard for people to warm up to the Clinton candidacy. While I’m agnostic about whether the Trump Administration will improve on this (especially given that some advisers, while ditching academic theory, seem to have replaced it with not just aerial but celestial visions of apocalyptic holy war), it’s easy — and a bit chilling — to see why the Clinton team had such a tough time.

A couple of minor issues: The authors call John Maynard Keynes an “early neoclassical economist” (@178), when he was neither a neoclassical, nor, if he had been, would he have been an early one. The book has extensive endnotes, but no list of references. And the title is puzzling. If it’s intended to be from Clausewitz, it’s mangled: Clausewitz wrote that war is *politics* by other means. Michel Foucault ironically inverted the formula, to the effect that politics is “war by other means.” Could this be what the authors meant? But actually, this book doesn’t adopt such a paranoid vision at all.

The authors’ personal politics notwithstanding, the book itself is even-handed and of value to a wide audience, provided readers have the patience to swim in its streams of policy prose. It certainly will have you thinking more deeply about the nightly news, and about whether there might be a better way for the US, or whatever country you live in, to conduct its foreign affairs.
Ler mais
16 pessoas acharam isso útil
Informar abuso
Traduzir avaliação para Português
Visualizar todas as avaliações
Voltar ao início
Conheça-nos
Ganhe dinheiro conosco
Deixe-nos ajudá-lo
Pagamento
E não se esqueça:
© 2012-2021, Amazon.com, Inc. ou suas afiliadas