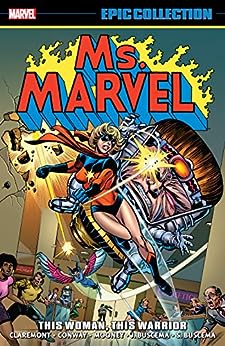 Before she was Captain Marvel, she was Ms. Marvel! NASA Security Chief Carol Danvers' life had long been intertwined with the alien Kree and their Earthbound soldier Mar-Vell, and soon she gained incredible powers of her own — and a colorful persona to go with it! Now, as editor of Woman magazine, Danvers must contend with Marvel's biggest blowhard, J. Jonah Jameson, while coming to terms with her brand-new life as a super hero! As Ms. Marvel, Carol faces down threats including the Scorpion, the Doomsday Man, Grotesk and M.O.D.O.K. — but her deadliest foe of all may be the dynamic Deathbird! Plus: Ms. Marvel fights alongside Spider-Man in battle with the Super-Skrull! And will she join the dynamic Defenders? Relive the early days of your favorite hero!
Leia mais
Previous page
Next page
e-Readers Kindle
Aplicativos de leitura gratuitos do Kindle
Disponível nesses dispositivos

Temple Phoenix
4,0 de 5 estrelas Before she was the Captain...
Avaliado no Reino Unido em 2 de fevereiro de 2019
Compra verificada
With the Captain Marvel movie due out in a few months, it only makes sense to include the adventures of Carol Danvers, or Ms. Marvel as she was back then, to the Epic Collection line. Her original series was pretty short - unfortunately there were sliiightly too many volumes to fit in a single volume, so instead we get two skinny ones instead (this one is 320 pages). Happily, though, we get both this year, so there won't be long to wait to get the whole run!

As the series starts, it's certainly an interesting premise - Carol Danvers, ex-NASA and new editor-in-chief of Woman magazine, has no idea that she is also costumed powerhouse Ms. Marvel... and vice versa! With both personas initially having no knowledge of the other's existence, it adds an added complication to her personal life and battles with supervillains (both existing menaces like the Scorpion and new foes such as the Destructor).

Gerry Conway and John Buscema kick the series off, although Chris Claremont takes over writing duties after the first two issues, and Jim Mooney picks up the art reigns a couple of issues after that. All provide sterling work, building up a strong supporting cast for Carol even as they throw her into thrilling fights with villains aplenty. The relationship between Danvers and Ms. Marvel is ever-evolving and often antagonistic, really helping to set her apart from other Marvel characters, even her most direct influence, the first Captain Marvel.

As well as the first fourteen issues of her own title, this volume also includes a Marvel Team-Up two-parter pairing her with Spider-Man, and an issue of Defenders that sees her helping out Marvel's non-team team. They could perhaps have thrown in a few introductory pages from Danvers's appearances in Captain Marvel, but I presume they are saving those for an eventual Captain Marvel Epic Collection (most of the relevant parts are recapped in flashback form here anyway).

Extras include editorials from the first two issues, a John Romita character design, a house ad, and eight pages of original art by Buscema, Mooney, Marie Severin and Sal Buscema. Even at a relatively slim size for the Epic line, this volume still manages to feel packed with great stuff.

Andrew Buckle
5,0 de 5 estrelas Very good
Avaliado no Reino Unido em 26 de janeiro de 2019
Compra verificada
Found this to be a a very enjoyable collection of the early comics of Ms Marvel. The art work is first rate and the stories are of their time. Some bonus material is included but not as much as usual. One thing to note, it is a very slim edition compared with many of the epic editions, with barely 300 pages in the volume. It is a pity that Marvel could not have included a number of pre-Ms Marvel tales (Carol Danvers) from her Captain Marvel appearances (perhaps just one or two of them or snippets as with the Mockingbird / Silver Surfer etc editions). Also includes a Defenders tale and Marvel Team Up (wonder if Marvel will ever bring out a Cat / Hellcat epic ? )
Ler mais
1 pessoa achou isso útil
Informar abuso
Traduzir avaliação para Português

James
5,0 de 5 estrelas Book came shipped in a very sturdy cardboard box...
Avaliado na Austrália em 22 de outubro de 2019
Compra verificada
... which is VERY good to see. I bought this from Amazon Australia and so far they have never let me down with the quality of service and effort they go to in order to make sure you get exactly what you pay for. A brand new book in perfect condition. I sadly cannot say h same for books I have to order from Amazon US... who think sending a book in a plastic bag is protection enough... it is not. I constantly see reviews of damaged books delievered by the US warehouses, they need to learn you save more time and money if you simply make an effort.

As for the book, I bought it because it was on sale and very cheap for an Epic collection title, so cannot pass that up as a volume 1... but also as a Birthday gift for my girlfriend to get her into american comics, she is a manga nerd. We both hated Captain Marvel the movie, so I wanted her to experience the character before she got destroyed in favour of pushing an agenda. The bet place to start is with Chris Claremont, the creator, the guy is a god tier writer in Marvel comics.... anyways, the I bought it as a joke to see the cringe on her face, to which was very amusing... but after reading the quality within I may have converted her over to classic marvel comics. Give it a shot, as far as female heroes go, she is up there... well she used to be, modern comics are trash, stick with the classics.
Ler mais
Informar abuso
Traduzir avaliação para Português
Visualizar todas as avaliações
Voltar ao início
Conheça-nos
Ganhe dinheiro conosco
Deixe-nos ajudar você
Pagamento
E não se esqueça:
© 2021-2022 Amazon.com, Inc. ou suas afiliadas