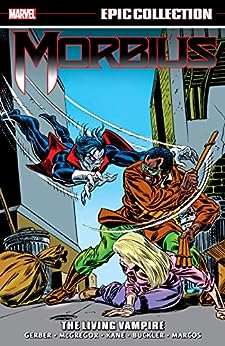 Cursed by an experiment gone wrong, Dr. Michael Morbius is possessed by an unquenchable thirst for blood — yet his heart beats like any other man’s. He is a living vampire! From his first appearance and solo color comic through his black-and-white adventures, this Epic Collection begins Morbius’ tragic adventure into fear. The sometimes mad, sometimes misunderstood doctor must contend not just with super heroes, but with bizarre cultists and satanic demons! Prepare for stories that will take you to the darker side of Marvel — a world of horror and the supernatural that overtook the industry in the 1970s and defined comics for a generation!
Leia mais
Previous page
Next page
Devido ao tamanho do arquivo, o download deste livro poderá ser mais demorado
e-Readers Kindle
Aplicativos de leitura gratuitos do Kindle
Disponível nesses dispositivos

Brendan Deneen is the author of the award-winning novel The Ninth Circle and the 2018 horror novel The Chrysalis. He's written Groot picture books for Marvel Press and Green Arrow: Stranded, an original graphic novel for DC. His other graphic-novel work includes The Island of Misfit Toys, Solarman, Phoenix, and Scatterbrain. His short stories and essays have been published by St. Martin's Press, Reader's Digest Books, 13Thirty Press, and Necro Publications.

Austin Rising began acting at the age of four and went on to study acting at the University of Denver. He can be seen on television in shows like Better Call Saul and Longmire. A gifted mimic, he enjoys narrating audiobooks in a number of genres including young adult, science fiction, and fantasy. He currently resides in Los Angeles, California. --Este texto se refere à uma edição esgotada ou disponível no momento.

Temple Phoenix
4,0 de 5 estrelas Horrifically Uneven
Avaliado no Reino Unido em 4 de março de 2021
Compra verificada
Morbius joins the Epic Collection program with this first installment; it's also the Epics' first real foray into Marvel's seventies horror period. Never one of Marvel's major characters, Morbius is another one that benefits from the format, with a bunch of material drawn from all over (covering the years 1971-1975) and collected into a chronological narrative.

We have his first appearance as a Spider-Man villain, and further tussles with ol' webhead in Marvel Team-Up and the Giant-Size Super-Heroes special. After that, Morbius doesn't just get one solo series... he gets two! He simultaneously appears in (Journey Into) Fear, a regular colour comic and part of Marvel's regular line, as well as Vampire Tales, one of their mature-reader-aimed black and white anthology magazines.

The Vampire Tales material is probably more like you'd expect from a comic based around a vampire, as Morbius battles against vile and violent demon worshippers in stark monotone. It's definitely a lot less kid-friendly than the comics, with blood and even the odd hint of nudity (although not anything too shocking by today's standards). It's certainly different and maintains a doomladen tone with the guilt-ridden bloodsucker struggling against foes who are even worse; it's definitely the high point of this volume.

The Fear stories are a lot less successful, not helped by a succession of writers churning through the book. Here, Morbius finds himself battling catpeople, travelling to alien worlds and getting caught in the middle of a frankly baffling feud between hyper-advanced aliens and an evil sorcerer. If that sounds pretty weird... that's because it is. It's an already odd tale made even stranger by having a protagonist that regularly stops to murder passers-by.

Extras include five pages of house ads, an editorial, eleven pages of original art and thirteen pages of covers from related trades and reprints. It's a book of two halves, and frankly one of those halves isn't great, but it's worth picking up if you're curious about Marvel's black and white magazine era and its more violent, bloody tone.
Ler mais
3 pessoas acharam isso útil
Informar abuso
Traduzir avaliação para Português

Elle
5,0 de 5 estrelas Great collection for Morbius fans
Avaliado no Reino Unido em 28 de setembro de 2021
Compra verificada
Morbius couldn't be regarded as one of Marvel's top characters but I've always had a soft spot for him and it's great to have these stories from 1971-1975 collected together in just over 400 pages. There's his appearances as an enemy of Spiderman, when Spidey had those bonkers extra arms. This is a fun storyline which also throws in the Lizard. Then there are his own stories headlining Adventure into Fear and the lovely black and white stories from Vampire Tales. If you like this one, you'll also want to get the 2nd volume Morbius - The End of a Living Vampire to complete the collection
Ler mais
2 pessoas acharam isso útil
Informar abuso
Traduzir avaliação para Português

David Alexander McDonald
3,0 de 5 estrelas The early calamities of Michael Morbius, Bitey-Guy
Avaliado nos Estados Unidos em 1 de maio de 2021
Compra verificada
I’m fond of the hokey comics of the 1960s and 1970s, and Morbius is grade-z hokum from the Marvel House Of No Such Thing As A Bad Idea. Michael Morbius was introduced as a tragic villain, a victim of fate and bad scientific practice, trying to cure the blood disease that was killing him. Unfortunately, with time running short he chose to experiment on himself…and, whoops, vampire! He first showed up in THE AMAZING SPIDER-MAN, just as Spidey developed four extra arms thanks to *his* self-experimentation, and then went on to appear in Marvel’s black and white vampire magazines. Sadly, he’s a bit of a mediocre menace, replacing Dracula’s pomposity with a great deal of bemoaning and whining.