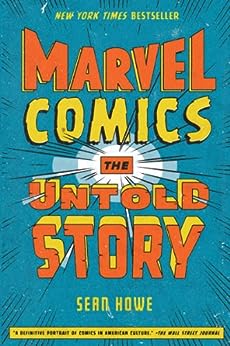 Sean Howe is the editor of Give Our Regards to the Atomsmashers!: Writers on Comics and the Deep Focus series of film books. He is a former editor and critic at Entertainment Weekly, and his writing has appeared in New York, The Los Angeles Times, Slate, Spin, and The Village Voice. He lives in Brooklyn, New York.

In the early 1960s, a struggling company called Marvel Comics presented a cast of brightly costumed characters distinguished by smart banter and compellingly human flaws: Spider-Man, the Fantastic Four, the Avengers, the X-Men. Over the course of half a century, Marvel's epic universe would become the most elaborate fictional narrative in history and serve as a modern American mythology for millions of readers.

For the first time, Marvel Comics reveals the outsized personalities behind the scenes, including Martin Goodman, Stan Lee, Jack Kirby, and generations of editors, artists, and writers who struggled with commercial mandates, a fickle audience, and--over matters of credit and control--one another. Marvel Comics is a story of fertile imaginations, lifelong friendships, action-packed fistfights, and third-act betrayals--a narrative of one of the most extraordinary, beloved, and beleaguered pop-cultural entities in America's history.

I. R. Kerr
4,0 de 5 estrelas Excelsior
Avaliado no Reino Unido em 14 de fevereiro de 2015
Compra verificada
As a Marvel fan from the mid 1960's onwards I thought I knew a fair bit about the writers and artists and the arguments that led to several renowned departures especially in the earlier phase those of Jack Kirby and Steve Ditko and the "creative differences" they had with Stan Lee as to who actually created major characters. There was so much more intrigue behind the scenes though.
This 400 plus page book adds lots more meat to the bones spanning the birth of Marvel up to the start of the recent spate of blockbuster movies.
If you are a Marvel fan it's a great read and includes tales of all the great creative minds that have made Marvel what it is today and some sad tales of former Marvel bullpen members who fell on really hard times after leaving the company for whatever reason. There's lots on the creative arrival and departures as well as the rivalry with DC Comics and the growth of some renowned independent comic groups. I remember the very brief interlude with Atlas Comics as I bought almost all of their titles.
If you are not a Marvel fan you may be grabbed by the recent problems caused by unmitigated corporate greed as a series of one track minded money grabbing executives with absolutely no interest in the comics themselves, they got rich off the backs of those who actually did the work with gimmicks like collectable variant overs solely designed to tempt comic buyers to splash out more money buying several copies of the same book rather than just buying something to read and enjoy.
The only reason it gets just 4 stars is the lack of illustrations, just one small picture of Stan & Jack at the end of the book, it could have done with more images of the bullpen and maybe some short biographies of the Marvel greats. That aside it's a great read.

Amazon Customer
5,0 de 5 estrelas Most important book about a comic company ever written
Avaliado no Reino Unido em 6 de março de 2019
Compra verificada
The one book that has destroyed my childhood reminiscing, brilliant read but behind the pages of stories are fantastic tales of wonder, my jaw dropped at certain parts ( certain creators hanging around new York , dropping acid and writing of the experiences) and laugh out loud at others ( Stan lees wig) so much to read with quotes given sources, I'm on my 3rd reread and still finding things I've missed, I'm gonna download the narration next. I've not looked at a marvel comic the same since reading this but I'm rereading some that are mentioned by issue number and seeing them in the context this marvelous book mentioned
Ler mais
Informar abuso
Traduzir avaliação para Português

M. W. Hatfield
5,0 de 5 estrelas You think you know the history of Marvel? Trust me, you're wrong!
Avaliado no Reino Unido em 24 de novembro de 2012
Compra verificada
Genius! If you have any interest at all in the creative or business end of the comic book industry over the past fifty years, then you need to read this book. The general Marvel narrative is well-known: desperate publisher allows experimentation, genius artist and wisecracking huckster create a new paradigm, the Sixties pop art revolution, College kids become the new audience, the original band splits up due to creative (and financial) differences, the Seventies cultural revolution, underdog becomes overdog, creators robbed of their rightful rewards etc etc etc.

And that's all here, of course- but there is so much more to the story. Carefully researched, generally impartial, willing to speculate, this is enormously entertaining, and full of new insights. A joy to read. Helped by Howe's witty prose, this is a delight, full of laugh out loud moments and clear explanation of very complex situations.

Here's a test for you- Howe's description of longtime Marvel bad guys AIM: "shady industrialists outfitted like futuristic beekeepers". If you laughed with recognition at that description- this is the book for you! Buy now!
If you love comics, you will love this! If you don't- you might like it anyway! Excelsior, pilgrims!
Ler mais
4 pessoas acharam isso útil
Informar abuso
Traduzir avaliação para Português

A. M. Mckenzie
4,0 de 5 estrelas Definitive account on Marvel during the 1980s
Avaliado no Reino Unido em 3 de fevereiro de 2013
Compra verificada
This is a very good account of what was going on behind the scenes at Marvel Comics ... during the 1980s. I was fascinated by this because I worked at the UK office of Marvel during that same period and made the pilgrimage to Marvel US (around 1982). But as a casual visitor, I had no idea what was going on with the editors on a day-to-day basis. This book explained it all completely.

Sean Howe's untold history of Marvel Comics really comes to life detailing the shenanigans during the period 1972 to around 1986. Sadly, the coverage of the golden years of Marvel (1961-1971) and the later period (post-1995) is a good deal thinner. Sparse, actually. This makes me wonder if Howe had planned just to concentrate on the Shooter years, but his publishers reconsidered and asked him to add material on the earlier and later periods.

There are other books that cover the earlier years better than this. "Tales to Astonish" does a very good job on Marvel of the 1960s. "Men of Tomorrow" also sheds some much-needed light on those years. Even Stan Lee's own "Excelsior" does a better job on the 1960s than "Untold Story" does.

And the corporate raider years of the mid 90s is far better covered in Dan Raviv's "Comic Wars".

The material on Marvel's fortunes during the late 1990s and onwards is positively spartan ... so cursory that it might as well have been left out.

Someday, someone will write a complete history of Marvel ... but this isn't it. Don't get me wrong ... if you want a thorough and balanced account of how Marvel fared under the leadership of Jim Shooter, "Untold Story" does a very fair job. It's just not the whole story.
Ler mais
7 pessoas acharam isso útil
Informar abuso
Traduzir avaliação para Português

McRonson
5,0 de 5 estrelas A worthy purchase, true believer
Avaliado no Reino Unido em 7 de março de 2013
Compra verificada
Got this off Amazon before Xmas and read it in one sitting (almost).

If you're on Facebook, I highly recommend author Sean Howe's dedicated page on this book as it contains an awful lot of visual information sadly not present in this fine volume (Jack Kirby's 1958 future cityscape illustration on this FB page is astonishing; Moebius who?).

Anyhoo, as an 'elderly' fanboy myself, I'm well aware of the history of Marvel Comics; even in Scotland, we've heard the alleged tale of a certain Marvel artist who beat up a fellow artist mate of his who wouldn't hand over the money he'd made for filling in a couple of issues said artist couldn't make the deadline on but it's good to have this oral history of Marvel Comics all confirmed in print, more or less.

For younger comic book fans, this book is a terrific read and I highly recommend it. I'd certainly never heard of David Bowie's ex-wife Angie having such a particular interest/involvement in the Black Widow character so that piece of trivia alone made it worth purchasing.

Author Howe's analysis of Marvel's editorial philosophy is spot on (ditto for same regarding the subtext found in Editor in chief Jim Shooter's own writing on the Avengers, for example) not to mention the business related ups & downs over the decades (no wonder Stan Lee mostly sat that stuff out).

Since this book is only available via Forbidden Planet and Amazon (or the odd charity shop), you'll not find it in any high street bookstores.