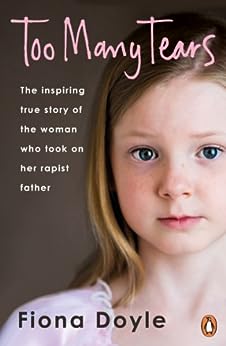 Too Many Tears is the moving and inspiring story of how Fiona Doyle came through the agony and humiliation of being sexually abused by her father, how she foudn the strength to seek justice, and how she coped when, at the final hurdle, it appeared that he was about to escape prison.

For as long as she can remember, and well into her teens, Fiona's father raped and abused her. Her mother blamed Fiona for leading him on. The effects on her life were catastrophic.

Fiona first reported her father, Patrick O'Brien, to the authorities in the early nineties but the police investigation went nowhere. She made a second complaint in 2010 and this time, it appeared, O'Brien would face the consequences of his crimes . He, pleaded guilty to sexually assaulting his daughter and Fiona assumed the next time she came to court, he would be going to jail.

Instead, shockingly, having suspended nine years of a twelve-year sentence, the judge released O'Brien on bail. Three days later, following a national outcry and questions in parliament, the presiding judge expressed his 'profound regret' to Fiona Doyle and sent O'Brien to jail.

Too Many Tears is Fiona Doyle's story of abuse and its aftermath - the turmoil and isolation she experienced as a child and young girl, the devastating price she continued to pay in her adult life, and how finally she had the courage and tenacity to take on her father - and the authorities - to make him face up to what he had done. It is a startling and inspiring story of survival and hope against the odds.

SandraB
5,0 de 5 estrelas Well written - worth reading even if this isnt your usual genre
Avaliado no Reino Unido em 27 de janeiro de 2014
Compra verificada
I read this book after seeing discussions on it on social media sites. I am not a fan of this genre, rightly or wrongly I normally wouldnt choose this type of book.

I was presently surprised and admit to becoming quickly engrossed in Fiona's life. The book doesn'tWha dwell on details of the sexual abuse. It concentrates more on how Fiona copes with her life right up to the court case a couple of years ago.

What comes across is a well written book about a woman who struggles not only with sexual abuse but how these affect her as she struggles with relationships both with her wider family and forming relationships with men.

I have given the book 5 stars as at the end I felt I knew Fiona, she laid herself bare but not with any self pity. She doesn't make excuses for anyone, she just tells them as they are.

This book shows that we never know what is going on in a family behind the closed door. Fiona is really brave in how she approaches the story she is telling, she never shies away from her own mistakes and time after time allows people another chance.
Ler mais
3 pessoas acharam isso útil
Informar abuso
Traduzir avaliação para Português

Sheila Camp
5,0 de 5 estrelas Excellent read of an awful subject
Avaliado no Reino Unido em 11 de agosto de 2015
Compra verificada
Am I allowed to say this was a good book. I say allowed because this is an awful subject to say it was a good book. It was written by a very brave person who only had minimal support. What happened to her files when she first reported her father's abuse? Why didn't hospital staff wonder how a young child had genital warts? The letters that Fiona wrote to her family I found quite moving. In fact these were more moving than the book itself. Written by a very strong person.
Ler mais
Informar abuso
Traduzir avaliação para Português

J M
5,0 de 5 estrelas Such an inspiration!
Avaliado no Reino Unido em 14 de março de 2014
Compra verificada
Wow, I choose this book as it resonated with my own story. What I wasn't prepared for was the depth of Fiona's bravery and resilience in the face of so much resistance and so many failings of those in public office who are supposed to help.

It's both a heartbreaking and affirming read, not just for victims but any person in Ireland and worldwide. I'm so glad she's had her happy ending.
Ler mais
5 pessoas acharam isso útil
Informar abuso
Traduzir avaliação para Português

Lane
5,0 de 5 estrelas Amazing! What a truly amazing lady Fiona is x
Avaliado no Reino Unido em 25 de fevereiro de 2015
Compra verificada
Wow Fiona, I've cried, been happy, got angry and wished and willed you on through this book. What a rollercoaster.