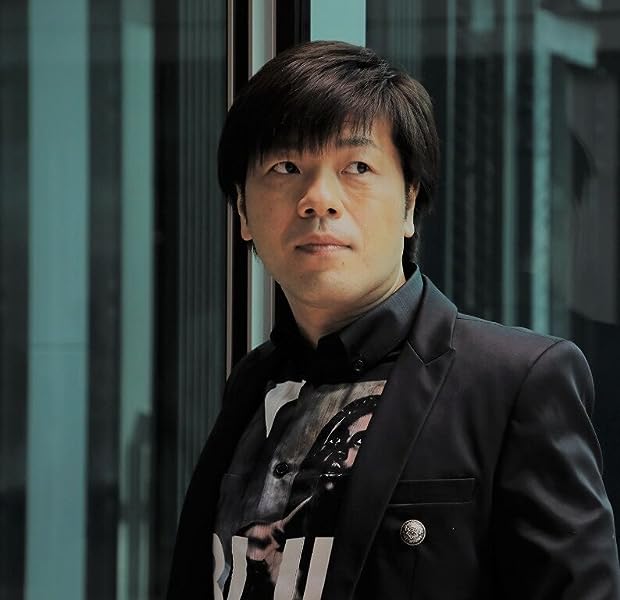 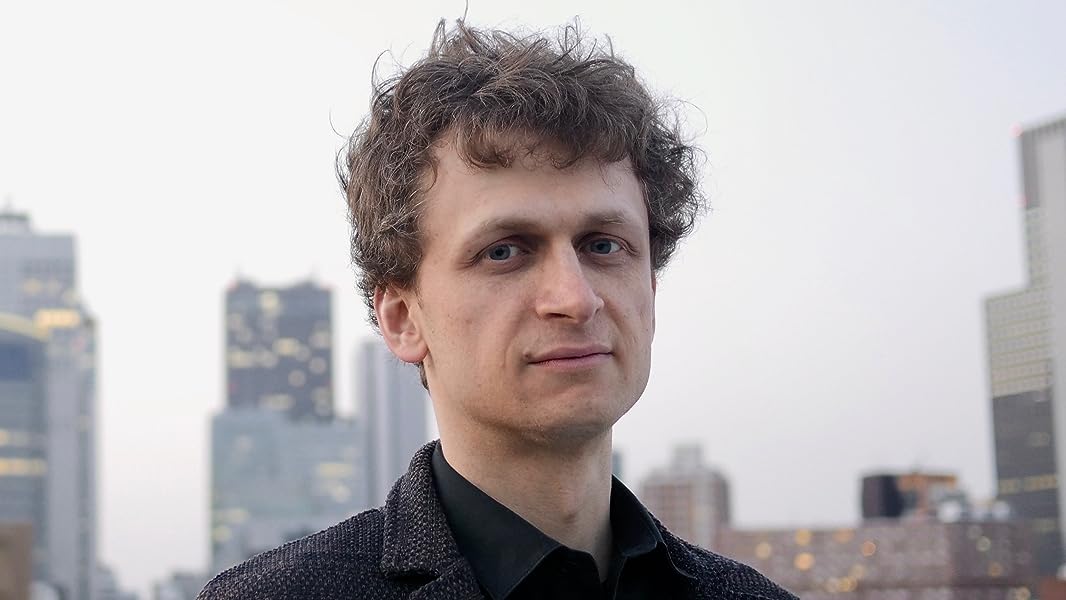 Keiichiro Hirano is an award-winning and bestselling novelist whose debut novel, The Eclipse, won the prestigious Akutagawa Prize in 1998, when he was a twenty-three-year-old university student. A cultural envoy to Paris appointed by Japan's Ministry of Cultural Affairs, he has given lectures throughout Europe. Widely read in France, China, Korea, Taiwan, Italy, and Egypt, Hirano is also the author of At the End of the Matinee, a runaway bestseller in Japan. Hirano's short fiction has appeared in The Columbia Anthology of Modern Japanese Literature and The Transparent Labyrinth. A Man, winner of Japan's Yomiuri Prize for Literature, is the first of Hirano's novels to be translated into English. For more information, visit en.k-hirano.com and follow Hirano on Twitter at @hiranok_en.

Mauricio S Jardini
5,0 de 5 estrelas An excellent book
Avaliado no Brasil em 2 de julho de 2021
Compra verificada
I read this book more to know the author then the story. So little by little I started liking the story too. It has a lot of Japanese cultural characteristics and you will need to a little bit os research.
Ler mais
Útil
Informar abuso
Traduzir avaliação para Português
Visualizar todas as avaliações

M. Dowden
5,0 de 5 estrelas Identity
Avaliado no Reino Unido em 2 de maio de 2020
Compra verificada
Keiichiro Hirano’s first novel to be translated into English does make for an intriguing read, but whether it will prove as popular here as it has in Japan and other countries, only time will tell. And if you are wondering when it mentions a liver transplant from a living person, yes, it is done, but I should stress not the whole liver is taken, so please do not think that this is a mistake in this book.

Here then we read of a woman whose husband dies, and then when she directly informs her husband’s family, she finds that her deceased partner is not who she thought he was. Contacting the lawyer who had done the divorce from her first husband some years ago, so he is on the track to find out who her husband really was, and what has happened to the person who she thought she was married to.

This book won the Yomiuri Prize for Fiction in Japan and it is quite thoughtful and multi-layered. If you think that this is a plain simple mystery due to the book details, then you would be wrong. Yes, this is a mystery but not a conventional crime mystery, so please bare this in mind to prevent disappointment. We are taken into the past and present of Rié Takemoto, the wife of the deceased and her bringing up her children, plus into the life of the lawyer, whose marriage seems to be gradually falling apart. Also, we are given details on the Japanese legal system, the xenophobia in the country and the prejudice against Zainichi Koreans.

Here then we are made to ponder why someone would want to change their identity, and for what purpose. We all know of cases where there is a change in sex or to conceal witnesses and such like from retaliation, but here we are shown that people can have more reasons to want to be someone else. As we think about this, we can see the strains that it can cause on those playing other parts, and what happens when it eventually comes into the open that someone is not who they purport to be. With a glimpse inside Japan’s legal system and how we can all get caught up in things, so this shows on many levels those things that we may ignore, even though doing so can have an impact on our own wellbeing, and that of others. This thus as I have mentioned is a multi-layered read, with so much to take in and contemplate even after you have finished this, thus actually making it a good choice for book groups. This book will also probably be more appreciated by those who are accustomed to reading books in translation, as they will have a greater understanding of cultural differences between nations and writing styles.

Shaiano
4,0 de 5 estrelas Insightful
Avaliado no Reino Unido em 8 de maio de 2020
Compra verificada
I chose this book from the kindle first reads choices, and I was looking for something different as I was suffering from crime and thriller fatigue.

This book focuses on the concept of “identity”, more specifically the struggle to find inner-peace and acceptance regarding circumstances that you have no control over, whether it being born into a different heritage from the society you live in or dealing with the ramifications of one person’s actions. It also delves into the effect external factors and prejudice can have in this battle.

I know next to nothing about Japanese culture, but this book offers an interesting insight into it. The translation was a little clunky in areas and I had to re-read sections to properly understand them, but overall it was a good job.

I would be interested to read more of this authors work if it gets translated, but for now I would highly recommend this book especially if you are interested in issues regarding mental health.
Ler mais
13 pessoas acharam isso útil
Informar abuso
Traduzir avaliação para Português

Kez
5,0 de 5 estrelas A beautifully written, intelligent and thought provoking mystery.
Avaliado no Reino Unido em 8 de maio de 2020
Compra verificada
’I have always thought of writing novels that, rather than making people's hands unable to stop turning to the next page, are so immersive that a reader would want to bask in it forever, in a state of both wanting and not wanting to turn to the next page’

That statement is from Keiichiro Hirano’s website. It’s a statement that perfectly sums up, for me, Haruki Murakami novels.

To compere Hirano to Murakami is probably unfair, because Murakami is one of my favourite novelists of all time. He does however, like Murakami, feature music, specifically Jazz. No opera though, or cats. I did find myself listening to Masabumi Kichuchi a lot after reading this!

Does Hirano achieve the aim of his statement in A Man? Well yes I think he does. I loved his style, very subtle emotionally, something I find in Murakami’s work. He also has a fine eye for detail. There is a scene where one of the characters, Kido, is thinking of having a few drinks in a bar when a Masabumi Kichuchi piano solo comes on, ‘The tempo seemed to slowly dismantle time, each note a clear droplet that fell and spread overlapping ripples through the silent interior.’ I loved that description. Even though you may not have heard Kichuchi, you feel as if you can almost hear the music jn your head.

A slight criticism is that the style isn’t consistent. This could be down to the translation, I notice this was mentioned in another review and I agree there were parts where it was a bit ‘chunky’ and didn’t flow smoothly. But this is a minor criticism and doesn’t deter you from enjoying the book.

The story is about mortality and identity. What is it that defines you? We all at times look at other people and think their lives are better, what would it be like if you could live their lives? ‘But how would you achieve this? ‘Could mendacious sincerity, consummately performed, be the ultimate deception.’

Hirano also covers heavy topics such racism and the death penalty. In fact he packs an awful lot into just under 300 pages (on the Kindle version). There is an awful lot to think about. On top of this A Man is also a detective story and is quite complex and dark.

The story concerns Rie Takemoto, who’s second husband, Daisuke Taniguchi is killed in a logging accident. He had told her never to contact his family if he died, but after a year she writes to his mother.

After this his brother arrives and it is discovered that the man who Rie had been married to was not all he seemed. This is the basis of the story but not all of it. It is multi layered.

Rie employs a lawyer, Kido, to unravel the mystery of Daisuke. Most of the book is centred around him. He too has identity problems. He becomes obsessed with the story of Rie’s husband, who refers to as X.

There is a lot of information given by Hirano about Japanese law, the family register system and Korean racism within Japan. It also deals with psychology and what makes us who we are. This may be too cerebral for some, but I didn’t find this. I found it entertaining and interesting, and at times yes, I did linger on a page wanting and not wanting to turn the page. I found at the end I had highlighted a considerable amount of the text. Text that I wanted to go back and read again.

Despite my minor criticism I was impressed by A Man, so much so that I look forward to more translations of Keiichiro Hirano’s books. It’s beautifully written, It’s not an edge of your seat thriller but it is a good detective novel.
Ler mais
8 pessoas acharam isso útil
Informar abuso
Traduzir avaliação para Português

Anne Duff
3,0 de 5 estrelas ***
Avaliado no Reino Unido em 1 de junho de 2020
Compra verificada
At first i thought I was going to love this book. It got off to a great start and I was hooked from page 1 but it seemed to dwindle off from the middle onwards. The language is beautiful and I enjoyed re-reading some paragraphs but the different identity swaps just ended up being too difficult to follow so that I couldn't relax enough to just enjoy the story.
Ler mais
7 pessoas acharam isso útil
Informar abuso
Traduzir avaliação para Português

Closet Romantic
4,0 de 5 estrelas An accomplished novel
Avaliado no Reino Unido em 5 de maio de 2020
Compra verificada
This book was my Amazon first read selection for May and I am so pleased that I chose it. Japan is not a country I know very much about and this book was delighfully littered with references to their culture, good and bad. It's mainly a tale of identity - repressed, borrowed, hidden etc. A very good read although I have dropped one star as I thought the translation was a little clunky in places. A few sentences needed reading several times to get what I considered to be 'sense'. I hope more of Hirano's writings are translated for a Western audience.
Ler mais
3 pessoas acharam isso útil
Informar abuso
Traduzir avaliação para Português
Visualizar todas as avaliações
Voltar ao início
Conheça-nos
Ganhe dinheiro conosco
Deixe-nos ajudá-lo
Pagamento
E não se esqueça:
© 2012-2021, Amazon.com, Inc. ou suas afiliadas