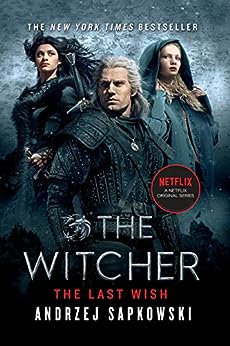 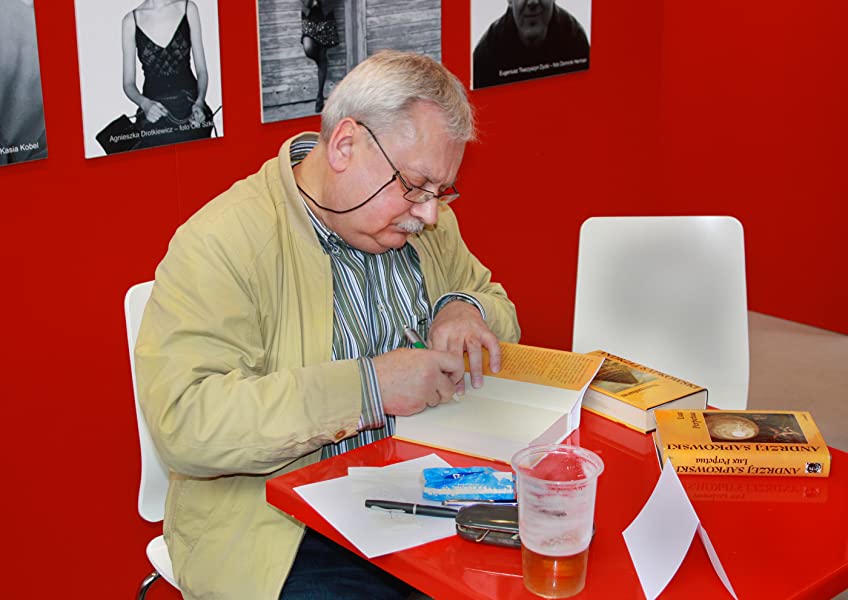 Introducing Geralt the Witcher - revered and hated - who holds the line against the monsters plaguing humanity in this first book in the Witcher series that inspired a bestselling game and is soon to be a major Netflix series. --Este texto se refere à uma edição alternativa kindle_edition

Sapkowski was born in 1948 in Poland. He studied economy and business, but the success of his fantasy cycle about the sorcerer Geralt de Rivia turned him into a bestselling writer and he is now one of Poland's most famous and successful authors, selling more in his own country than Stephen King or Michael Crichton. --Este texto se refere à uma edição alternativa kindle_edition

Introducing Geralt the Witcher - revered and hated - who holds the line against the monsters plaguing humanity in this first book in the Witcher series that inspired a bestselling game and is soon to be a major Netflix series.<br/><br/>Geralt of Rivia is a Witcher, a man whose magic powers and lifelong training have made him a brilliant fighter and a merciless assassin.<br/><br/>Yet he is no ordinary killer: he hunts the vile fiends that ravage the land and attack the innocent.<br/><br/>But not everything monstrous-looking is evil; not everything fair is good . . . and in every fairy tale there is a grain of truth.<br/><br/>Andrzej Sapkowski, winner of the World Fantasy Lifetime Achievement award, started an international phenomenon with his Witcher series. The Last Wish short story collection is the perfect introduction to this one-of-a-kind fantasy world.<br/> --Este texto se refere à uma edição alternativa kindle_edition
Leia mais

Diego Yasuhiko Kurisaki
3,0 de 5 estrelas It's a good book
Avaliado no Brasil em 2 de março de 2017
Compra verificada
I read it because I've played the game and was curious about the book that gave origin to the game series.

But because it's a series of stories I wasn't really hooked by the book.
Ler mais
Útil
Informar abuso
Traduzir avaliação para Português
Visualizar todas as avaliações

Rev
1,0 de 5 estrelas read a chapter before you buy the book
Avaliado no Reino Unido em 4 de junho de 2019
Compra verificada
There are so many good reviews of this book, so I strongly recommend potential readers to download a chapter and try it out before purchasing. If I had done that, I would not have bought this book. I have read 40% of it with effort and will add it to the very short list of books I have dropped half way.
I agree with others that call the writing 'disjointed'. It stutters, short sentences that are good for fights but just don't fit with a relaxed dialog. I can't find a rythm in the writing, like those books that just take your breath out and force you to turn pages one after the other. The fights are quite good, but then there other things like rough and heartless sex scenes that make little sense (they would if the rest of the book was different, but as they are they add little). The reason for me to drop it is that the characters are all soulless. The witcher cannot talk straight, and if you take the character names out of the dialogs you don't really know who is talking. It feels like there are just a few characters that just change name and face and appear in different stories... I don't know, I cannot feel anything for them, just not my type of book. On top of it the stories don't seem to have much depth and add little to the witcher character. Perhaps the other 60% of the book is awesome, but after what I have read, I rather invest my time in something else.
In summary, hope you really like it (most reviewers loved it), but just in case take a peek at a chapter before buying it.
Ler mais
217 pessoas acharam isso útil
Informar abuso
Traduzir avaliação para Português

R. Clarke
5,0 de 5 estrelas Bite sized legends
Avaliado no Reino Unido em 1 de junho de 2018
Compra verificada
Although I read fantasy, I first encountered Geralt of Rivia in the video game, The Witcher 3: The Wild Hunt and as I explored this gaming world, I was inspired to discover Andrzej Sapkowski's books – starting with this first collection.

The last story in the book deservedly took third place in a magazine competition and sowed the first seed that created a universe. I enjoyed these original stories, discovering Geralt’s origins in pre-game events. (And these stories are echoed in-game.}

The collection is assembled to reflect the chronology of Geralt’s life, although we have yet to learn many things – and I look forward to reading more books. Sapkowski creates a brilliant and exemplary framing structure for these stories that gives them more impact – and adds to the unfolding plotlines that I know develop. (This is a writing technique that I need to learn.)

Some amazing and complex characters are introduced, including the sorceress, Yennefer, whose life is woven into a complicated relationship with Geralt that opens great possibilities. And then there is Dandelion, the bard whose tales and exploits are something else amusingly different. These are origin stories perhaps before the Witcher-universe had fully-formed, but the characters are relatable.

The tales are rooted in heroic deeds – even if Dandelion has a habit of re-telling them differently. The author demonstrates that he has been inspired by folklore. However, while the echoed fairy stories have a germ of truth, this is a grimmer tradition than Grimm, in a cutthroat environment. There are the Slavic monsters that a reader might expect but other mythologies play their part, adding to a rich tapestry.

The world rings with the realism of bloody steel and fangs, the smells of soiled streets and tempting food. The era doesn’t feel not static, even across so few stories. The times are changing and so are the people. Evolving? Maybe not - but sowing many seeds. This is a medieval world of superstition and persecution – and riven by discrimination that resonates today. Witch-burnings are inevitable, and nothing is black-and-white. Not all monsters are obvious or what they seem.

Is my interpretation coloured by exploring the game-world? Perhaps, but these are the roots of the legend that is Geralt of Rivia. I look forward to discovering how the writing evolved, and how the world of The Witcher builds in later stories and novels. This was definitely the place to start on my quest to enjoy how Sapkowski grew from a very good writer into a master craftsman.

Chris Moore
5,0 de 5 estrelas A collection of short stories featuring Geralt, aka The Witcher
Avaliado no Reino Unido em 30 de agosto de 2016
Compra verificada
This book is essentially a collection of short stories about Geralt of Rivia, who is better known as The Witcher. The stories relate the exploits of Geralt in which he has to demonstrate all the skills (including magic, fighting, sowrdsmanship, diplomacy, cunning, flattery, etc.) that he has developed during his training to become a Witcher. All the stories are real page-turners and different enough in their plots to easily maintain the readers interest.

The narrative flows easily, the plots are exciting and the translation from the author's native Polish is excellent. There were however a few instances in which I had to read the odd paragraph again where the sentences were rather awkward, but this in no way distracted from the story.

Overall, I thoroughly enjoyed this introduction to The Witcher, and will definitely be reading more of the books in the series by this very talented, imaginative author.
Ler mais
64 pessoas acharam isso útil
Informar abuso
Traduzir avaliação para Português

Justyna Tenel
5,0 de 5 estrelas Quite a decent translation of an excellent book
Avaliado no Reino Unido em 14 de janeiro de 2017
Compra verificada
I still prefer the book in Polish, and I saw one particular sentence (the anti-djinn exorcism) translated with more panache, but this is quite close to how reading the original felt like, so I can definitely recommend it.

'The Last Wish' is a good introduction into the world of the Witcher, whether you come at it as the fan of the games or general sci-fi aficionado.

And even if you are neither there is something uniquely true about the human nature, the ever changing world and life in general that can be gleaned from it.

I read it originally as a teenager and in Polish, but years have passed, translations have occurred and the book is still very good.
Ler mais
52 pessoas acharam isso útil
Informar abuso
Traduzir avaliação para Português

Absurd Chaos
4,0 de 5 estrelas A good read for those that enjoyed the other books or the games
Avaliado no Reino Unido em 15 de setembro de 2018
Compra verificada
I played the Witcher 3 video game and loved the world so have started the books. I have read the first in the series and now this, which is set before the main series.
The last wish is an episodic story telling the tale of geralt and dandelion and they're first meeting with yennifer.
I thoroughly enjoyed it, meeting new characters and monsters and seeing that geralt is more than just a cold blooded killer looking to get paid but thinks and plans for the best outcome for all; a great antihero. I loved his meeting with yennifer and dandelions sarcastic nature.
If you like the game or enjoyed geralt other adventures this is worth your time. If you like fantasy and adventure in an adults world then this is for you. The author has created a wonderfully visceral world with consequences and nuance. I applaud his efforts and can't wait to read book 2
Ler mais
14 pessoas acharam isso útil
Informar abuso
Traduzir avaliação para Português
Visualizar todas as avaliações
Voltar ao início
Conheça-nos
Ganhe dinheiro conosco
Deixe-nos ajudá-lo
Pagamento
E não se esqueça:
© 2012-2021, Amazon.com, Inc. ou suas afiliadas