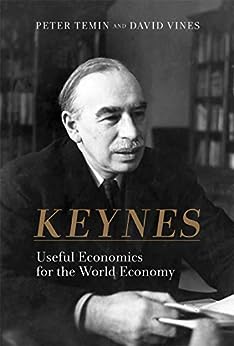 As the global economic crisis continues to cause damage, some policy makers have called for a more Keynesian approach to current economic problems. In this book, the economists Peter Temin and David Vines provide an accessible introduction to Keynesian ideas that connects Keynes's insights to today's global economy and offers readers a way to understand current policy debates. They survey economic thinking before Keynes and explain how difficult it was for Keynes to escape from conventional wisdom. They also set out the Keynesian analysis of a closed economy and expand the analysis to the international economy, using a few simple graphs to present Keynes's formal analyses in an accessible way. Finally, they discuss problems of today's world economy, showcasing the usefulness of a simple Keynesian approach to current economic policy choices. Keynesian ideas, they argue, can lay the basis for a return to economic growth.

Peter Temin and David Vines's Keynes is highly relevant for today's world. Written in an accessible and lively style, it puts the history of Keynes's thinking into the broader perspective of the history of economic thinking and the history of macroeconomic crises from the interwar years until the present day.

―Thomas Piketty, author of Capital in the Twenty-First Century

This is the Keynesian story told in real time as Keynes tried to persuade policy makers during the decades between 1919 and 1945. It brings Keynesian thinking alive, and explores how similar today's problems are to those experienced between the wars. Lucidly written for students but also a fascinating exploration of a revolution in economic thought.

John Maynard Keynes was one of the towering intellectual figures of the twentieth century and, as a result of the global financial crisis, one of the most controversial figures of the twenty-first. Peter Temin and David Vines, with characteristic clarity, explain precisely why. In so doing they dispatch much unnecessary and unfortunate confusion about the man, the work, and the legacy.

Peter Temin is Professor of Economics Emeritus at MIT. He is the coauthor of Keynes: Useful Economics for the World Economy (MIT Press) and of The Leaderless Economy.

David Vines, Professor of Economics and Fellow of Balliol College at the University of Oxford, is a joint editor of a number of books on global economic governance. He is a coauthor of The Leaderless Economy: Why the World Economic System Fell Apart and How to Fix It. --Este texto se refere à uma edição esgotada ou disponível no momento.

John Hagens
5,0 de 5 estrelas deceivingly easy to read
Avaliado nos Estados Unidos em 15 de março de 2015
Compra verificada
Short book, deceivingly easy to read, but deep insights in the application of Keynes's thinking to our current economic situation. The comparison of the Euro with the gold standard illuminates the problem that southern Europe has. A fixed exchange rate, which is what the Euro implies for price comparisons for countries using the currency, is sometimes incompatible with internal and external balance if prices and wages are sticky, a keynesian assumption. Internal imbalance (unemployment) needs demand expansion leading to more external imbalance (trade deficits). Greece, which had both high unemployment and a trade deficit, did not have the policy tools to address both, using keynesian theory. Takes a second read to capture the depth of this little book. I especially found the discussion of Hume's price-specie flow mechanism interesting, taking me back to my undergraduate course in the history of economic thought.
Ler mais
3 pessoas acharam isso útil
Informar abuso
Traduzir avaliação para Português