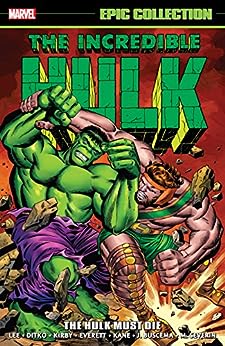 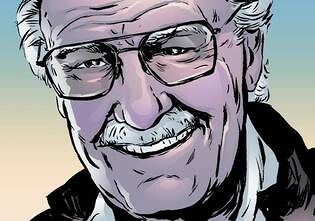 Marvel's green goliath is pulling no punches! After the cancellation of his debut series, the incredible Hulk returns in Tales to Astonish...and he means business! Dr. Robert Bruce Banner's alter ego battles General "Thunderbolt" Ross, the Leader and his Humanoids, the Executioner, and more communists than you can shake a tank at. And if that's not enough, round two pits the Hulk against Hercules, introduces classic villain the Abomination, dives into the intrigue of the Secret Empire, and goes cosmic with the Silver Surfer and the High Evolutionary! Featuring stories by Stan Lee and art by a who's who of Marvel greats - Steve Ditko, Jack Kirby, Gil Kane, Bill Everett and John Buscema - these are the tales that made the Incredible Hulk a global icon!
Leia mais
Previous page
Next page
Devido ao tamanho do arquivo, o download deste livro poderá ser mais demorado
e-Readers Kindle
Aplicativos de leitura gratuitos do Kindle
Disponível nesses dispositivos

Temple Phoenix
4,0 de 5 estrelas It All Starts Coming Together
Avaliado no Reino Unido em 20 de novembro de 2017
Compra verificada
After the failure of the Hulk's debut title after only six issues and a whole bunch of guest appearances in other heroes' books, the Incredible one got a second chance when he took over the second story slot in anthology book Tales to Astonish in 1964. This latest Epic (Volume 2 for those True Believers keeping track) collects those stories all the way up to 1967, and represents the period where things really started coming together for the character.

We're back on the New Mexico missile base commanded by General 'Thunderbolt' Ross, and almost immediately another key player is introduced; Glenn Talbot, the stalwart officer who would become a nemesis for the Hulk and a rival for the hand of Betty Ross. His presence immediately shakes up the cast, as the General tries repeatedly to destroy the jade giant, Betty wonder what her beloved Bruce is up to, Bruce himself tries to deal with the unexplained absences caused by his monstrous transformations, and Talbot tries to nail Banner for being a communist spy.

Several times in the breathless editorials that begin and end every issue, Stan Lee refers to the Hulk's continuing travails as a soap, and that's what it truly is. The shorter 11-page instalments mean a change of writing style: instead of discrete adventures, the book reads as one long ongoing storyline, each plotline rolling naturally into the next. It's an approach that's very refreshing. As well, after dalliances with nocturnal transformations and device-initiated Hulkouts, we finally get something approaching the familiar emotional trigger that would come to define the character.

As well as Talbot, we also get the appearances of two more iconic villains; the hyper-intelligent Leader and the powerful Abomination. The Leader in particular causes grief for both the Hulk and Banner over a great number of issues. As well as lesser villains such as Boomerang, Hulk also ends up fighting bad guys around the world and even in space, a sign that the title was beginning to branch out.

Extras include a Not Brand Echh story, original art from Ditko, Everett, Buscema, Kane and Severin, T-shirt art, the ads and art for the 1966 Hulk sweatshirt, and the cover of the second Hulk Masterwork volume. A far more assured run than the original, even those dithering over buying the slightly reprint-redundant first volume will find a lot to enjoy here.
Ler mais
5 pessoas acharam isso útil
Informar abuso
Traduzir avaliação para Português

Jon Abbott
5,0 de 5 estrelas Sci-fi, super-heroes, and Saturday morning serials, all with added Hulk
Avaliado no Reino Unido em 25 de julho de 2020
Compra verificada
As almost everybody probably already knows who is visiting this page on Amazon, flushed with the surprise success of the Fantastic Four, The incredible Hulk was the second Marvel comic to be released (just before smash hit Spider-Man), and was an instant… failure, lasting just six issues, to be found in volume one of the Epic Collection.

Despite the best efforts of Lee and Kirby, and then Lee and Ditko, the Hulk did not take off with the general public. However, it wasn’t in Stan Lee’s DNA to give up on anything, and he continued to feature the Hulk in guest appearances in the other, all successful, Marvel super-hero strips, and in the months to follow, the green-skinned trouble-maker turned up in Fantastic Four, Spider-Man, Thor, and the first few editions of The Avengers, just to let the readers know he hadn’t gone away. These are collected in volume one.

Finally, as Marvel Super-Heroes filled up all available pages of the former Atlas monster, sci-fi, and supernatural titles (Astonish, Suspense, Strange Tales, Journey into Mystery), the Hulk returned, as the back-up feature in Tales to Astonish, a title primarily showcasing Ant-Man, then Giant-Man, and then (after they/he departed for The Avengers) Sub-Mariner (Hulk moved in with issue 60, while Sub-Mariner replaced Giant-Man with 70).

This back-up strip turned out to be more successful, but by now it was the mid-‘60s and Marvel could do no wrong. With issue 102, as Marvel expanded their titles in the late ‘60s, Tales to Astonish became The Incredible Hulk, and Sub-Mariner acquired his own title. This book is composed of almost all the Tales to Astonish run of Hulk ten-pagers, beginning with the first, in issue 60, and ending prematurely but comfortably with issue 96. It’s a wonderful, if variable collection.

I say variable, because of all the Marvel titles of the 1960s, Incredible Hulk had a tough time keeping hold of a regular artist, and an even tougher time finding a good one. One issue, 84, had so many hands working on it that, although mostly the work of Everett and Kirby, it is even credited—justly—to virtually everybody passing through the bullpen! That must have been a wacky payday in the accounts office. Despite this supposed handicap (and the quality of the art certainly goes up and down), this primitive roughness seems to suit the series. Of all the Marvel strips, Hulk could most easily survive below-par art.

However, there were as many good months as bad. Bill Everett’s style provides a nice tough-looking pug-faced Hulk (78–83), and the book opens with Steve Ditko’s grotesque, hideously ugly ultra-violent rubber-faced Hulk during the beginning of the first and best Leader story (60–67), and closes with Marie Severin’s beautiful, muscular and handsome serene version (92–96), who meets the Silver Surfer and the High Evolutionary in two very cosmic escapades.

And so, through the course of the series, we go from the most thuggish, loutish Hulk, to the most laid-back, introspective, and philosophical incarnation, with dialogue to match. In between, finishing the lengthy Leader storyline, Kirby provides art for 68—70, and layouts for the banal duo of Mike Esposito and Bob Powell (71–75). Their issues look like they’ve been drawn by the Hulk.

John Romita illustrates the landmark 77 (in which the world finally learns that Bruce Banner is the Hulk; this is not a spoiler, it’s all over the cover), John Buscema does some poorly inked, very early, very bad work on 85—87, and finally there’s some artistic quality as Gil Kane enjoys a nice four issue run on the strip (88–91), introducing us to the Abomination (after a single earlier issue, 76, in which his work was buried under coarse inks by Mike Esposito; it was Esposito, working here under his pen-name Mickey Demeo, who also messed up Kirby and Buscema’s art).

No one artist seems to stay on the series for more than half-a-dozen issues (and no wonder, with Esposito scrawling all over their work), and very often it’s as few as three. Ironically, once the Hulk got his own title, Herb Trimpe would begin one of the longest uninterrupted runs on a Marvel character in the history of comics, staying with the strip for years. He makes his debut in issue 94, providing the inks for Marie Severin on the last three strips in this collection (not including the seemingly inevitable hopelessly unfunny contribution from ‘humour’ title Not Brand Echh, which seems to be mandatory in every Silver Age selection).

The one consistent factor on all these chapters is the presence of Stan Lee as writer and editor, but he’s all over the place, and who can blame him, with all the different art styles to contend with. The Leader storyline rumbles along quite satisfyingly to a clever quality conclusion (later undone by the need to bring him back) from 60 to 74, leading (if you’ll pardon the pun) into a hokey time travel adventure that takes us to the fateful issue 77 when, thinking the tormented and falsely accused Bruce Banner is dead, Rick Jones reveals that he was the Hulk to clear his name (although his story isn’t confirmed until as late as 87, and revealed to the world in 92). Of course our hero still stands, and takes on a wide range of randoms in the remaining issues in a bunch of wackadoodle run-ins with everything from more sub-standard Saturday morning serial shenanigans with robots, rockets, and secret societies to such Marvel Universe heavyweights as Hercules, the Watcher, the Stranger, and the Silver Surfer. As ever, Lee barely stops for breath, and the Epic Collections of his work are the comic-book equivalent of binge-watching box sets… okay, just one more episode, but dammit, it just leads on to the next quick fix…! What’s coming next…? Oh, go on then…

Some editions of the Silver Age Epic Collections have poor or strange choices of cover (Thor, we’re looking at you), but the Hulk series are particularly strong on the early issues (volumes 1—4 so far), an added incentive to make these the best choice for posterity. This is the best and clearest way to read about the early days of Hulk, the only screw-up being that they’ve forgotten to include the black and white Rampaging Hulk strips, set chronologically between Hulk’s own book and Astonish (volume 1b, perhaps?).
Ler mais
Informar abuso
Traduzir avaliação para Português

j.gill
5,0 de 5 estrelas Great Stuff!
Avaliado no Reino Unido em 27 de julho de 2018
Compra verificada
The stories are all classics of course featuring the talents of Lee, Ditko, Kirby etc. What makes this collection wonderful is the way in which they are presented. None of the garish colours you often find in reprints, or that horrible shiny glossy paper which seems to mute the colours and inking. These are close as you can get to the experience of reading them at the time of publication. Probably even better as the printing wasn't always that great back in the day.

Admittedly the original covers were better but I've yet to see any reprints which have done the original covers justice. Drat! And double drat!
In a minor key of course.
Ler mais
1 pessoa achou isso útil
Informar abuso
Traduzir avaliação para Português