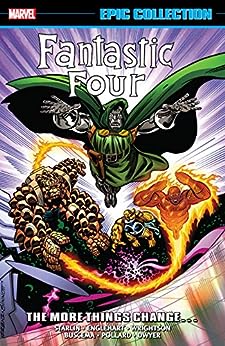 Big changes for Ben Grimm and Sharon Ventura! The Thing is still adjusting to his new role as leader of the FF, whose lineup now includes the Human Torch, Crystal and Sharon “Ms. Marvel” Ventura! But as Crystal’s presence complicates Johnny’s marriage, things get extra rocky for Ben and Sharon — literally! When more cosmic rays transform the two in unexpected ways, how will they react to their monstrous new mutations? Meanwhile, the Fantastic Four get involved in Doctor Doom’s war with Kristoff Vernard — but on whose side? And a trip to the Mole Man’s realm leads across time and space — and to encounters with Belasco, Master Pandemonium and…the Beyonder! Plus: Hulk and Thing throw down in two supersized slugfests!
Leia mais
Previous page
Next page
Devido ao tamanho do arquivo, o download deste livro poderá ser mais demorado
e-Readers Kindle
Aplicativos de leitura gratuitos do Kindle
Disponível nesses dispositivos

Temple Phoenix
4,0 de 5 estrelas The Thing Takes Charge
Avaliado no Reino Unido em 14 de julho de 2019
Compra verificada
This latest Fantastic Four Epic Collection is Volume 18 (they are released non-chronologically for any new readers joining the Epics now), covering issues from 1987 and 1988. It's an interesting time for the FF, with Reed and Susan on sabbatical and the Thing in charge. It really shakes up the dynamic of the team, and naturally the stories in this volume focus on the complicated relationships between the 'new' Fantastic Four - Ben and Johnny are on shaky terms due to the latter marrying Ben's longterm paramour Alicia during the Thing's absence, Inhuman Crystal, as an ex of Johnny's, threatens said marriage, and Sharon "Ms. Marvel" Ventura's own feeling for Ben are conflicting with her own past trauma... and that's before another dose of cosmic rays hit the pair...

Writer Steve Englehart and artists John Buscema and Keith Pollard are sure hands at the helm of the book, introducing new villains such as Fasaud as well using old enemies like Doctor Doom and the Mole Man to great effect. The stories collected here build to a bravura storyline that manages to tie together Secret Wars, Englehart's run on West Coast Avengers, short-lived Marvel title Comet Man, and the various Cosmic Cubes from throughout Marvel history. It's great fun, always supported by the deep character interaction.

Also included is a graphic novel by Jim Starlin and Bernie Wrightson, a lightweight but enjoyable romp that teams the Thing and the Hulk on an intergalactic adventure with very high stakes. Fittingly, the volume also finishes with a Hulk crossover, as Doom manipulates the pair of superstrong heroes into clashing yet again.

Extras include a Marvel Age article on the new team, a promotional story page from the Marvel Age annual, and promotional art from Pollard and Mike Mignola. It's a good collection, and something a little different which proves that the FF CAN work, and work well, without adhering to the classic four members.

Corwin S. Gibson
2,0 de 5 estrelas A truly bad Fantastic Four run alongside a great graphic novel.
Avaliado nos Estados Unidos em 27 de fevereiro de 2021
Compra verificada
The comics collected in this volume are honestly not worth your time, except maybe if you wanted to write some good criticism about how poorly Steve Englehart handled female characters during his long career in comics. The Starlin-Wrightson Hulk/Thing graphic novel that’s also included is honestly good enough to warrant simply tracking down an original copy at your favorite comic shop, as it can be had for practically a song these days.
To make matters worse, as is often the case, I regret ordering this through Amazon because it arrived with a massive crease across the front cover.
Ler mais
Informar abuso
Traduzir avaliação para Português