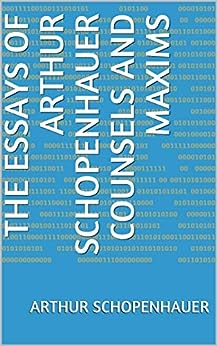 arz
4,0 de 5 estrelas Good Book but especially the early half
Avaliado na Índia em 4 de outubro de 2019
Compra verificada
Typical Schopenhauer wisdom. I enjoyed it except last chapter which is on experience of old age. Perhaps I am not old so could not relate with what Schopenhauer says.
Ler mais
Informar abuso
Traduzir avaliação para Português

Phil the John
1,0 de 5 estrelas Essays of Schopenhauer
Avaliado no Reino Unido em 13 de outubro de 2013
Compra verificada
A meditation that one should take to heart - easily one of the most intelligent and uncompromising thinkers there has ever been.
Ler mais
Informar abuso
Traduzir avaliação para Português

I found Schopenhauer one of the key thinkers that linked us and upheld logic and rationality and carried the torch of this progressive thinking verses the fundamentalism and rhetoric that imbues the society with mime virus of poison of fear for mind control the masses.

Schopenhauer opens your mind against rhetoric of the mass mind control that being spurred upon us daily.

Schopenhauer is antivirus - cure for this rhetoric fear infections and mind control.

codeman
4,0 de 5 estrelas Motivational, Inspiring Thought
Avaliado nos Estados Unidos em 19 de janeiro de 2016
Compra verificada
I downloaded this book using my Kindle app a long time ago. It may have been referenced in the making of the The Matrix films, not sure. It wasn't till a few weeks ago that I finally decided to take time to read it. Being 29 now, I've started developing an appetite for thought and knowledge.

There were some really insightful points on handling one's self with fleeting desires, understanding how people may behave. It spoke of pain being thought of as something that can be positive and real. And as you age, life becomes less illusory. I would need to reread another time to fully comprehend Arthur Schopenhauer's work here for sure! I am most appreciated to be able to enjoy it now for what it is.

There were some typos or errors, though it's probably due to the translation from German to English, but by no means I don't wish that to be any main deterrent. Some ideas may sound heavily antiquated, but this was really great food for both my intellect and soul at this point in my own life.

If you're like me and interested in reading some older philosophical views about life in general that can be digested in small sessions, give this work a try.