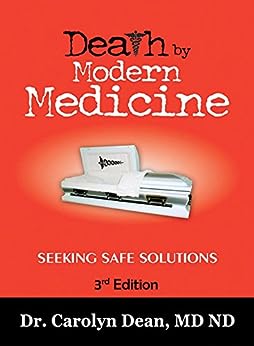 JVW
5,0 de 5 estrelas Every word is true - a fantastic book.
Avaliado no Reino Unido em 20 de outubro de 2014
Compra verificada
This book is the most informative I have ever read about the cover ups by Doctors, Big Pharma, Scientists, researchers etc.
If you want real health then this book is a must. It is a very long read but well worth the effort to find out the scams that could ruin your health. I have trusted Carolyn Dean for many years and she is always right. Learn from this book and spread the word - especially if you think donating to Cancer Research is a good idea.
Ler mais
1 pessoa achou isso útil
Informar abuso
Traduzir avaliação para Português

Ms. Bonnie J. Cameron
5,0 de 5 estrelas Well worth the read
Avaliado no Canadá em 12 de junho de 2017
Compra verificada
After going through chemo, I have been reading as much as I can get my hands on and afford regarding chemical treatments that are hazardous. This book is amazing. I am only half way through and learning so much.
Ler mais
1 pessoa achou isso útil
Informar abuso
Traduzir avaliação para Português