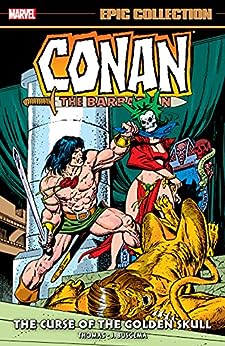 Jon Abbott
3,0 de 5 estrelas Paint by numbers populist perfection replaces a true original
Avaliado no Reino Unido em 12 de setembro de 2021
Compra verificada
This is the third of the Conan Epic Collections, which uncharacteristically (but rightly) for this series, appear to be coming out in chronological order. We have now moved from the lithe young pragmatist, thoughtful literate observations, and stylish, art nouveau/middle East look of the Barry Smith issues to the post Thomas/Smith era of the musclebound oaf, offhand casual sexism and macho posturing that would be the norm for the character (and his countless imitators to come) throughout the ’70s.

Roy Thomas remains the writer, and adapts accordingly to the new over-the-top ridiculousness of what would become the standard barbarian comic book genre. There is no pretence of artistry or maturity. Snarling soldiers, quivering bimbos, slavering monsters, cowering comic relief sidekicks, and wild-eyed slobbering villains would be the order of the day, all of them judged by a slice and dice barrel-chested vagabond with tree trunks for legs and rolls of billiard balls for arms. All the delightful subtleties of the Thomas/Smith era are gone. What works for the series, and prevents it from becoming a complete joke, are Roy Thomas’ literate scripts and amusing dialogue, and John Buscema’s sheer professionalism when it comes to storytelling, figure work, and composition. These are what you call good of their kind. If this is your Conan, Buscema is your man.

As for the cover choice, what is there to say? They are all crass and ugly, most of them by Gil Kane on auto-pilot, with interference from John Romita (presumably to remove any last trace of originality) and the one chosen is the best of a bad lot. That said, the first choice would surely be Neal Adams’ cover for issue 37, although not truly representative of the interior of the Collection as he barges in to have a go at the Buscema version for just a single issue. Thomas rises to the occasion. Thus sated, he hands back to the maestro, who illustrates every issue but for 40, a fill-in by Rich Buckler, also emulating the Buscema template. Flipping through the pages, you barely notice the change of artists.

All the stories in the first half of the book are singles, and virtually indistinguishable from one another, until we reach a four-parter in the middle of the book, at which point the storytelling gets a little more complicated in terms of continuity, although much the same in content. Thomas’ writing becomes a little more interesting with each story. Ironically, or perhaps I should say, without irony, right in the middle of all this is a cover for a Conan reprint special by Barry Smith and an editorial about all the awards the former version won (surely this should be in the extras at the back?). But, as I said in a previous review, this lowbrow (literally) Conan was the more popular version, and it works on its own level to its own limitations. Barry Smith’s Conan was something very special and unusual, but it wasn’t what the mainstream market wanted. With Smith gone, Conan was watered down into admittedly a more accurate representation of his pulp magazine origins, adolescent male fantasy, James Bond in a loincloth, magic replacing science, swordplay replacing gadgets. Feminists will fume, but no-one else would, or should, take these yarns seriously. Thomas and Buscema have the formula down to perfection here, and there is much more of the same to come. These Epic Collections present them well, and faithfully. They are a good read, as Roy Thomas always is, but nothing special, so don’t pay crazy money for them, under thirty is about right.
Ler mais
4 pessoas acharam isso útil
Informar abuso
Traduzir avaliação para Português

Amazon Customer
4,0 de 5 estrelas Classic Sword and Sorcery
Avaliado nos Estados Unidos em 9 de novembro de 2021
Compra verificada
If you are a fan of fantasy/sword and sorcery, it doesn't get much better than this. Roy Thomas' writing is great (as usual). However, this is the start of John Buscema's classic run on Conan and his art style is just perfect for the subject matter. I loved the earlier Barry Windsor Smith issues, but THIS is my Conan. Buscema conveys savagery and brutality along with heroism and adventure so effortlessly. His composition on splash pages is unrivaled. The art really transports the reader to "an age undreamed of." These issues are Marvel Bronze Age gold.

The only reason I gave it 4 stars instead of 5 is due to the cheap materials Marvel uses for printing these days. The cover and pages are flimsy and crease easily. I also had to return the first book I received because Amazon packed it in a bubble mailer which (combined with the cheap materials) allowed it to be bent during shipping.
Ler mais
Informar abuso
Traduzir avaliação para Português
Visualizar todas as avaliações
Voltar ao início
Conheça-nos
Ganhe dinheiro conosco
Deixe-nos ajudar você
Pagamento
E não se esqueça:
© 2021-2022 Amazon.com, Inc. ou suas afiliadas