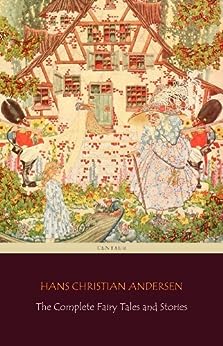 Sanvijo
5,0 de 5 estrelas Loved title
Avaliado no Brasil em 10 de janeiro de 2018
I love this book. I always wanted to know about the fairy tales in their originals. I hope this book will be enjoyable for so many people.
Ler mais
1 pessoa achou isso útil
Útil
Informar abuso
Visualizar todas as avaliações

jrid
4,0 de 5 estrelas for young and old alike
Avaliado nos Estados Unidos em 26 de junho de 2015
Compra verificada
This has his well known stories such as The Little Mermaid, The Snow Queen, The Tinderbox, and some more obscure ones like Soup From A Sausage Skewer, The Red Slippers (parodied as The Green Shoes in a Porky Pig cartoon), The Galoshes of Fortune, and What The Moon Saw. Like most people, I was tired of hearing the same old fairy tales, and wanted to read lesser known ones. I've always preferred Andersen's tales to the Grimm stories, and this book didn't disappoint. The best part is in the title. The stories are in chronological order, running from 1835-1875 (the year of his death) and the stories do change noticeably later on. Also, I'm only guessing here, but it appears some stories were published after his death, as the last few are dated in the 1920's and 1940's. Some stories are good for a quick read, only spanning one or two pages. When reading the stories that Disney adapted into movies, namely The Little Mermaid and The Snow Queen (Frozen), it is astonishing how much Disney changed the story.
Ler mais
4 pessoas acharam isso útil
Informar abuso
Traduzir avaliação para Português

Kendra Mase
4,0 de 5 estrelas A Great Collection
Avaliado nos Estados Unidos em 24 de março de 2014
Compra verificada
The price of this collection was a great deal for as many stories were given, however, some of the phrases were off or missing sections completely. I'm hoping they update the book and maybe then I'll give them 5 stars.

However, the books were enjoyable to read. I looked up the tale of the Little Mermaid when I was a teen, but just read about it on Wikipedia, so I was happy to read the full book and was surprised at how much was left out and how different it is from Disney (my new motto is 'Disney lies'!) Same goes for Rapunzel (which is actually a plant/herb. Who knew?) and a couple other tales.

There were some other tales I've never read or heard of before and it was quite enjoyable to read those tales as well. I shared some with the kid I babysit and she was shocked at how dark they were and was eager to read others to see how they differed than the ones she knew from Disney.

I recommend this book to anyone interested in fairy tales or has kids or interacts with them frequently. This is a great deal and quite a steal for the quantity and price!

M. Brian Stone
5,0 de 5 estrelas Long slog, well worth the effort!
Avaliado nos Estados Unidos em 6 de fevereiro de 2014
Compra verificada
Most folks are familiar with Anderson's Fairy Tales, especially those found in illustrated children's books and those made in movies. This book contains so many more tales and stories that represent the broad spectrum of this famed Dane. Featured are stories of the common folk of Denmark, a short history of that country, and a huge collection that represent the culture of much of Northern Europe. Andersen is very fond of illustrating his stories by using anthropomorphic illustrations of animals and plants. The chronological order of these stories brings this culture through Andersen's lifetime.
Ler mais
3 pessoas acharam isso útil
Informar abuso
Traduzir avaliação para Português

Wilchbla
5,0 de 5 estrelas Good for Adults and Those Living Their Second Childhood.
Avaliado nos Estados Unidos em 11 de setembro de 2015
Compra verificada
I always wanted to read these along with Grimm's Fairy Tales. I pretty much skipped over the things that other children did when I was a child and went straight to the monster movies. So mostly out of curiosity I've decided to purchase this book and I can honestly say I'm enjoying it. The fairy tales back in the old days really are quite mature compared to today's Disneyfied stories.
Ler mais
1 pessoa achou isso útil
Informar abuso
Traduzir avaliação para Português

W. Williams
5,0 de 5 estrelas Old and charming
Avaliado nos Estados Unidos em 25 de março de 2014
Compra verificada
Many of us grew up the with some fairly common fairy tales, but this collect has a assortment of tales that I believe have been placed on dusty shelves for way to long and have more charm and plot to them than todays children's tales we hear today. So, if you are willing to take a chance with something new but old and charming then do so with the intention of not to analyze but to bring to life some of your old imagination as a child you have put in the closet, in a box, on the highest most shelf and forgotten. This review is from the kindle version and not the book.
Ler mais
2 pessoas acharam isso útil
Informar abuso
Traduzir avaliação para Português
Visualizar todas as avaliações
Voltar ao início
Conheça-nos
Ganhe dinheiro conosco
Deixe-nos ajudá-lo
Pagamento
E não se esqueça:
© 2012-2021, Amazon.com, Inc. ou suas afiliadas