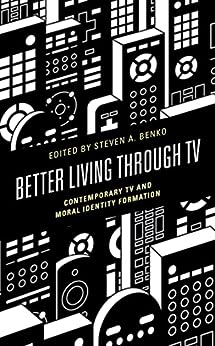 Watching television need not be a passive activity or simply for entertainment purposes. Television can be the site of important identity work and moral reflection. Audiences can learn about themselves, what matters to them, and how to relate to others by thinking about the implicit and explicit moral messages in the shows they watch. Better Living through TV: Contemporary TV and Moral Identity Formation analyzes the possibility of identifying and adopting moral values from television shows that aired during the latest Golden Era of television and Peak TV. The diversity of shows and approaches to moral becoming demonstrate how television during these eras took advantage of new technologies to become more film-like in both production quality and content. The increased depth of characterization and explosion of content across streaming and broadcast channels gave viewers a diversity of worlds and moral values to explore. The possibility of finding a moral in the stories told on popular shows such as The Sopranos, Breaking Bad, The Wire, and The Good Place, as well as lesser known shows such as Letterkenny and The Unicorn, are explored in a way that centers television viewing as a site for moral identity formation.