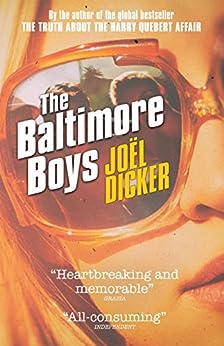 Joël Dicker was born in Geneva in 1985, where he studied Law. The Truth about the Harry Quebert Affair was nominated for the Prix Goncourt and won the Grand Prix du Roman de l'Académie Française and the Prix Goncourt des Lycéens. It has sold more than 3.6 million copies in 42 countries. The Baltimore Boys, at once a prequel and a sequel, has sold more than 750,000 in France. The Truth About the Harry Quebert Affair is now a major SkyWitness series starring Patrick Dempsey. --Este texto se refere à uma edição esgotada ou disponível no momento.

﻿Fresh from the staggering success of The Truth about the Harry Quebert Affair, Marcus Goldman is struggling to write his third novel. A chance encounter in Florida throws him some inspiration from a surprising source: Alexandra Neville, the beautiful, phenomenally successful singer and Marcus's first love. All at once, memories of his childhood come flooding back. Memories of a family torn apart by tragedy, and a once glorious legacy reduced to shame and ruin.
The Baltimore Boys. The Goldman Gang. That was what they called Marcus, and his cousins Hillel and Woody. Three brilliant young men with their whole lives ahead of them, before their kingdom crumbled beneath the weight of lies, jealousy and betrayal. For years, Marcus has struggled with the burdens of his past, but now, he must attempt to banish his demons and tell the real story of the Baltimore Boys.
--Este texto se refere à uma edição esgotada ou disponível no momento.

Katie Lou
1,0 de 5 estrelas I don't know why I didn't give up
Avaliado no Reino Unido em 26 de janeiro de 2019
Compra verificada
I really enjoyed The Truth About the Harry Quebert Affair, so I was looking forward to the follow up. Unfortunately, this was nowhere near the same standard. There is so much wrong with this book.

Unlike the Harry Quebert Affair, there is no intrigue or mystery. There is lots of reference to 'the tragedy' but no hints as to what it could be. The book does jump about from present to past, but the actual central tragedy unfolds in a very linear fashion at the very end of the book.

The rest of the book is a massively drawn out story of the most unrealistic childhood ever. Nobody is normal, everybody is incredible or terrible. I assume the writer was going for an unreliable narrator, but only because that is the only explanation for how ridiculous the story is. Of the four children, we have an NFL standard footballer, a future best selling writer, a future international pop sensation, and a student 'more advanced than every teacher in the school'. We have 8 year olds bribing teachers to get free private school places. 10 year olds beating up 16 year olds, three teenagers beating up 6 men. A whole school dedicated to systematic abuse and humiliation scared into completely changing their ways by one child. You get the idea. Similarly, people don't just have faults, they go from hero to criminal.

Despite the book spreading over more than a decade, there isn't really any character development. All of the characters are very 2 dimensional. The actual tragedy could have been quite a tragic story handled well, but I simply didn't care enough about the characters. None of the characters are nice people, every choice they made was ridiculous and seemed to have little motivation. It didn't help that the dialogue was awful, and the sentences were short, clipped and had no particular flair or style.

I only finished the book because I enjoyed Harry Quebert so much, I was convinced it would get better and be worth it in the end. It wasn't.
Ler mais
12 pessoas acharam isso útil
Informar abuso
Traduzir avaliação para Português

Angela H
5,0 de 5 estrelas Pick of the bunch for summer reads if you like commercial/literary cross overs
Avaliado no Reino Unido em 15 de junho de 2018
Compra verificada
I read this over summer vacation, along with a pile of other highly recommended new novels. Bearing in mind that I like well written novels that have a defined story (so somewhere between commercial and literary fiction), I found it was without doubt the pick of the bunch. It does not feel the same Dicker's first novel, being much more a story of family relations rather than a mystery, but is still beautifully written and thoroughly enjoyable. Maybe some overtones of Pat Conroy, in a different setting? I've tried to work out whether the fact that I was reading it on Kindle on the beach made me less aware of its length - and it is quite long - but I was never aware that I was waiting for it to come to a conclusion. I'm not going to reiterate the plot - many other reviews have done that well -but it worked well enough for me to stay interested throughout. One last thought: maybe some of the effect for the reader is caused by reading it in translation (and the translation is superb): it can produce a slight sense of detachment from the action, although for me this felt quite appropriate to the story. Do try it for yourself and see what I mean. Meanwhile, I look forward to Mr Dicker's next novel - he's so much better than most of the alternatives.
Ler mais
5 pessoas acharam isso útil
Informar abuso
Traduzir avaliação para Português

mosaic
3,0 de 5 estrelas A mixture of hit and miss
Avaliado no Reino Unido em 11 de março de 2019
Compra verificada
I bought this book because it's supposed to be the prequel/sequel to the Harry Quebert Affair - which itself was a bit of a mixed bag for me. This book suffers from the same shortcomings - too drawn out and repetitive. It definitely has its moments but towards the end I was speed reading and just wanted to finish it so I could start reading something else. I only kept reading because I wanted to find out what the big "tragedy" was that the author kept referring to. A cheap trick to hook the readers, really. When I found out, I was both underwhelmed and incredulous. In fact, many things in the story felt contrived and far fetched from reality. But as I've said, the book has its moments and the author is still very young and has the potential to grow into a good writer. As for it being a sequel/prequel to the Harry Quebert Affair - there's not one single reference to the previous story at all - the only link is the main character, who seems to have completely airbrushed the memory of Harry Quebert from his subsequent life. To sum it up, this book is not a complete waste of time - I think people need to read it and make up their own minds about it.
Ler mais
Informar abuso
Traduzir avaliação para Português

Rossan, Sheila
5,0 de 5 estrelas A family saga
Avaliado no Reino Unido em 1 de março de 2019
Compra verificada
The book describes a saga of an extended family over a number of years. I was particularly interested in the rivalries , both within and across generations, as well as the intensity of the warm relations. The devestating effects of such problems and the protections afforded to some were realistic. what I disliked the most was the constant interchange of time spans--hard to keep track.
The author held my attention by hinting aboutg what would eventually come
Ler mais
1 pessoa achou isso útil
Informar abuso
Traduzir avaliação para Português

Sarah
3,0 de 5 estrelas Reasonable read but flawed as a work of literature
Avaliado no Reino Unido em 16 de outubro de 2018
Compra verificada
The story was OK though the plotting was a bit obvious, with the author referring to the equivalent of "something nasty in the woodshed" (see Stella Gibbons Cold Comfort farm) rather too much. Also I found the relationship between the boys to be unbelievable - far too emotionally needy. I'm not sure whether the short, choppy sentences were a translator's choice, but they made it sound a bit crass and characters' "voices" were undifferentiated.
Ler mais
2 pessoas acharam isso útil
Informar abuso
Traduzir avaliação para Português
Visualizar todas as avaliações
Voltar ao início
Conheça-nos
Ganhe dinheiro conosco
Deixe-nos ajudá-lo
Pagamento
E não se esqueça:
© 2012-2021, Amazon.com, Inc. ou suas afiliadas