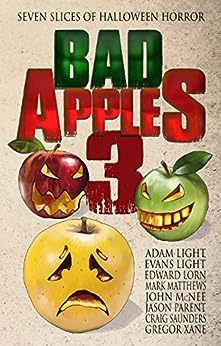 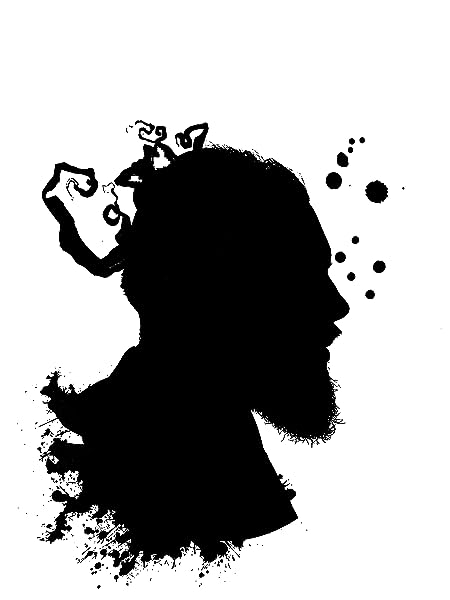 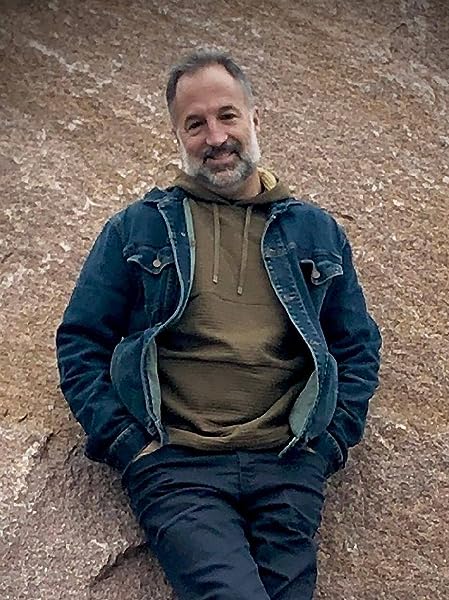 Bad Apples 3 is bigger and better than ever!
"...a delicious concoction of tales..." - Cemetery Dance Online

A fresh delivery of macabre tales for the haunting season.

Novellas and short stories include:

• On Halloween night, an artist intends to use humanity as his canvas, to mold flesh into his greatest masterpiece. In Adam and Evans Light's BELLE SOUFFRANCE, suffering has never been so beautiful.

• Everyone knows you are what you eat. So Cam probably shouldn't munch on those chocolate eyeballs he stole. Sins of the past are only one bite away in John McNee's CHOCOLATE COVERED EYEBALL.

• Halloween comes once a year for most people. Unfortunately for Harvey, it might be coming around a little more often in Craig Saunders' OCTOBER'S END.

• The girl behind the counter at the local costume shop reads horror novels and only horror novels. She's perfect. And she's hosting an intimate Halloween get-together in Gregor Xane's THE UNCLE TAFFY'S GIRL.

• Charli is usually lonely, but tonight she's on a bus headed to a party where she hopes the man of her dreams might finally notice her. But when a masked man enters the bus, it'll be the ride not the party she never forgets in Edward Lorn's LAST STOP.

• Christians say Halloween is a pagan holiday, and Keagan's mother doesn't think Jesus would approve of celebrating it. Little does she realize that they're about to find out if that's true from Jesus himself in Mark Matthews' BODY OF CHRIST.

• Any cornfield Halloween party filled with teenagers dressed like iconic horror villains is bound to end with murder and mayhem. But when a grim reaper throws in a twist, the killing really gets out of hand in Jason Parent's PULP


Buy the paperback and get special FREE matchbook pricing on the eBook from Amazon.
(This book contains adult content and is suitable for mature readers only.)

Corpus Press is a publisher of horror and weird fiction, specializing in modern pulp that emphasizes plot over gore. Based in Charlotte, North Carolina, the press has garnered praise from SCREAM Magazine, Cemetery Dance, Horror Novel Reviews, Hellnotes and others for its Bad Apples:Slices of Halloween Horror series, the anthology Dead Roses: Five Dark Tales of Twisted Love, and for its short story collections and novellas.


ADAM LIGHT lives in northeast Florida with his wife, his youngest daughter, and a couple of hellhounds. His short stories can be found in the anthologies BAD APPLES, BAD APPLES 2, DEAD ROSES: FIVE DARK TALES OF TWISTED LOVE, as well as in his short story collection, TOES UP. Adam is currently working on several projects, including a collaboration with his brother, Evans Light.

EVANS LIGHT is the author of SCREAMSCAPES: TALES OF TERROR, the novella ARBOREATUM and is co-creator of DEAD ROSES and the BAD APPLES anthology series. He is the proud father of fine sons and the lucky husband of a beautiful wife.

EDWARD LORN lives in the southeast United States with his wife and two children. He is currently working on his next novel.

JOHN MCNEE is the writer of numerous strange and disturbing horror stories, published in a variety of strange and disturbing anthologies, as well as the novel PRINCE OF NIGHTMARES. He is also the creator of Grudgehaven and the author of GRUDGE PUNK and the sequel, PETROLEUM PRECINCT. He lives on the west coast of Scotland, where he works for a trade magazine.

MARK MATTHEWS has a B.A. in English Literature from the University of Michigan and is a licensed professional counselor. His novel MILK-BLOOD has been optioned for a full length feature film, and the sequel, ALL SMOKE RISES: MILK-BLOOD REDUX, was released in February of 2016. He lives near Detroit with his wife and two daughters and is a member of the Horror Writers Association.

In his head, JASON PARENT lives in many places, but in the real world he resides in Southeastern Massachusetts with his cuddly corgi named Calypso. He is the author of the novels SEEING EVIL and WHAT HIDES WITHIN, the collection WRATHBONE AND OTHER STORIES as well as many published short stories.

CRAIG SAUNDERS is the author of more than thirty novels and novellas, including MASTERS OF BLOOD AND BONE, RAIN and DEADLIFT. He writes across many genres, but horror, humor and fantasy are his favorites. Craig lives in Norfolk, England, with his wife and children. He likes nice people and good coffee.

GREGOR XANE lives in Ohio. When he's not writing, you'll find him drinking an orange soda and hugging a bucket of fried chicken outside your bedroom window. He's the author of the novellas SIX DEAD SPOTS, THE HANOVER BLOCK, TABOOGASM, and the forthcoming BRIDES OF HANOVER BLOCK.

“Belle Souffrance” in BA3 brings together the talents of the two Light Brothers in a horrific tale dominated by a protagonist that can best be described as a combined mad scientist/psychopathic murderer. As the character Serge Aubichon’s background is disclosed, readers watch helplessly the birth of a monster (considering one of the events in Serge’s past, the concept of birth itself can be monstrous). The sense of isolation that is so predominate in “Tommy Rotten” by Adam Light in BA2 along with the writer’s descriptions of nature at its least appealing and unnatural resurfaces in “Belle Souffrance.” The human suffering found at the beginning of Evans Light’s “Candie Apple” in BA2 and to a degree in “Tommy Rotten” is turned onto its head as Serge Aubichon allows the dark side of his father to dominate his psyche and motivations. The more loving and artistic abilities of his mother—attributes Serge most admired and hoped to emulate as a youth live on in only a morphed shadow of reality of what once was in the man who changes his name to L’Artiste. “Belle Souffrance” is a seamlessly written story with the reader pretty much unaware of which brother constructed which portions of the writing to the story. One thing is for sure, however: with the Light Brothers working together, readers get twice the horror as the writers’ two minds meld into telling one gripping, often graphic narrative.

Of all of the stories in BA3, John McNee’s “Chocolate Covered Eyeball” most reads like a story told by the old Cryptkeeper from Tales from the Crypt. From the grotesque title McNee introduces his readers to seemingly innocent characters and a back story told by a man native to the equally innocuously appearing small town of Hollybrook to his skeptical, outsider girlfriend. Like so many of the Cryptkeeper’s tales, “Chocolate Covered Eyeball” contains elements of subtle, sardonic humor and dark, fanciful revenge all tied together with a warped sense of justice.

“October’s End” by Craig Saunders is one of the more rare tales of “quiet horror” to be found in the BA collections. Although there is no gore and next to no violence, the theme of the story is quite frightening in the same sense of Robert Marasco’s 1973 novel, Burnt Offerings. Contrary to the notion that everything comes to an end, not all things do in Saunders’ tale—especially evil that can over and over again rob life and existence from others.

In BA3 Edward Lorn’s “Last Stop” is illustrative of one of the volume’s advertised adjectives: “Badder.” The horror in this tale is less fantastic than “Halloweekend” in BA2 and far more realistic (which in many ways makes the horror of the tale all the greater) with plenty of splatter as a crazed psychopath bent on revenge for a personal life gone to hell seizes a hostage so that he has someone to witness the carnage he plans on perpetrating. As he does with “Halloweekend,” Lorn derails readers’ expectations with a plot twist near the end that few will see coming and which totally changes the outcome of the story.

Of all of the stories in the BA anthologies, Mark Matthews’ “Body of Christ” may be the most controversial for some readers (probably less so for most horror fans), not because of gore and violence (although there certainly is some), but because of the religious references beginning with the germane title that also appears throughout the story. Young Keagan lives with the most fanatical (and hypocritical) of pious mothers since Carrie White in Stephen King’s Carrie (1974), a dying, helpless father, and only a dark walk-in closet in which to take refuge and squirrel away what to others would be worthless bits and pieces of things, but for Keagan are among the only possessions that he can call his own. “October’s End” is awash in irony that builds throughout to the cleverly foreshadowed, apt climax.

For his contribution to BA3, Parent gives readers both a homage to and a twist on horror films of the 1980s (for the most part) as eleven high school students of a horror film club gather in a stereotypical remote setting to celebrate Halloween in “Pulp” (the longest story in the collection). Garbed in the costumes of famous horror characters, the youths look forward to an evening of spooky films, typical energetic antics, drinking, (and for some) sex, never expecting the grisly fate that awaits them. For Jamie Carpenter, it is a most memorable night as friends begin to meet grisly deaths and Jamie (along with the reader) is clueless as to who the killer might be or how to stop the bloodshed. He is both blessed and cursed by the appearance of a well-known “Grade B” horror character from film that repeatedly shows up at the most opportune moments and is most certainly not among the guests invited to the evening’s festivities. Parent provides a short surprise at the conclusion that will have readers smirking like Anthony Perkins at the end of Psycho.

We start with a collaboration from the Light Brothers, entitled "Belle Souffrance". Our main character, Serge, had a difficult beginning--shaping him into the man he now is, "L'Artiste". "Nothing was black or white without gray nestled between." He is now ready to bring his version of art to the populace. Although I enjoyed this tale, I couldn't help but feel that it seemed more of an excerpt from a longer work. (4*)

Next up was John McNee's "Chocolate Covered Eyeball". This one showcased the dangers of stealing from the local shopkeeper. While the writing is excellent and completely with the holiday theme, the outcome was fairly predictable from the beginning....or so I thought. McNee added an original "twist" to the finale that made it all the more exceptional! (4*)

"October's End", by Craig Saunders was one that I found flawless in both its execution and the claustrophobia, confusion, and fear that it imparted to the reader. Harvey has been helping "grandmother" for untold Halloweens, and his scattered thoughts and memories project onto us perfectly: "There might be a reason the house was called October's End, but Harvey knew October never ended. It never had, and never would, and names and houses and old ladies all lied . . ." (5*)

"The Uncle Taffy's Girl" by Gregor Xane may have a common idea at its core, but done with Xane's off-beat flair, it becomes something much more twisted and demented. (3*)

"Last Stop" by Edward Lorn was a good story in fitting in with the theme, and I honestly did not see where the ending was going, completely. (3.5*)

"Body of Christ" by Mark Matthews has to be the darkest, and most emotional tale of the anthology. There is no explaining this one easily--you just need to read it for yourselves! (4.5*)

"Pulp" by Jason Parent was a tale that I felt ended the anthology on the perfect note! Filled with '80's horror movie and plot references, this story showcased the perfect embodiment of the Halloween spirit, ending on a completely unique note that made me wish for a sequel. (5*)

Of the entire anthology, I'd have to say that I enjoyed Jason Parent's contribution the most, followed closely by Craig Saunders'. Mark Matthew's also left a sour taste that you won't soon forget! Overall, a great anthology for the season!