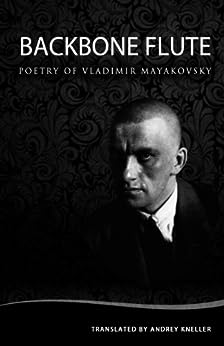 Danilo Hora
5,0 de 5 estrelas An excellent translation to be read out loud
Avaliado no Brasil em 29 de julho de 2015
The Backbone Flute is my favorite Mayakovsky poem, and Andrey Kneller's english rendering is now my favorite translation of it. In any language. I like it even better than my own translation to portuguese.
Ler mais
Útil
Informar abuso
Traduzir avaliação para Português
Visualizar todas as avaliações

Brodie
5,0 de 5 estrelas A non-depressing Russian classic? How dare he?
Avaliado no Reino Unido em 8 de dezembro de 2016
Compra verificada
A very thought-provoking and energetic book that has most of Mayakovsky's big works. Sadly, there is very little in this book about Mayakovsky's passionate attachment to Communism, but I suspect that might have more than a little to do with the translator's prejudices... or those he expects for the hoped-for audience. All in all, though, this is about the most exciting poetry book I've read this year and would recommend it to anyone.
Ler mais
2 pessoas acharam isso útil
Informar abuso
Traduzir avaliação para Português

Before I came across this I had no knowledge of this Poet. This was another random poetry buy for me. This is a Russian Poet and his work has been translated to English by Andrey Kneller. What is interesting about this book is on the one page you get the work in the original language and on the opposite page the work in English.

This book truly is a book that can change one’s idea of what great poetry is about.

I have never experienced the amazing one of a kind control that Vladimir has. He takes, a sentence and brings it to life in an emotional roller coaster of changes within moods and emotional appeal. A word to him, comes to life in vibrant colors of personal senses.

Mayakovsky created a living emotionally desired truth, that lingered from page to mind and then into the heart, but most of all the soul. Mayakovsky creates inside his poetry something so bold, so exploratory, that the senses of the one reading, can't help but feel wasted, thoroughly excited, and exhausted. His poetry is truly a unique journey that I have to say in all honesty I am floored I had never heard of him or read any of his wonderful works.

What makes him stand out is his unique and odd reality of writing. Which I gather is the problem in translating most of his work because he used a unique writing style only to him. His work is odd because he did irregular line breaks while writing his poetry that most poets would never dare to do. Sometimes rhyme and non-rhyme that came together in sync and then non-sync. He blasted his work with massive metaphors and descriptions through his personal imagery that made his poetry a one of kind in nature.

"And so they say – "the incident dissolved" / the love boat smashed up / on the dreary routine. / I'm through with life / and [we] should absolve / from mutual hurts, afflictions and spleen."

Would I Return to: In a heartbeat? I have already started reading it a second time. His work is truly a one of a kind experience and I am happy that I came across this book.

oh, if I only were
quiet,
like thunder, -
I’d moan
and the earth would tremble, languished.
If I allow my vast voice
to rumble, -
the comets, wringing their burning arms,
would plunge in anguish

A pimp and a fraud all the while.
From all of you,
Who soaked in love for plain fun,
who spilled
tears into centuries while you cried,
I’ll walk away
and place the monocle of the sun
into my gaping, wide-open eye.
Ler mais
2 pessoas acharam isso útil
Informar abuso
Traduzir avaliação para Português

A.M.
5,0 de 5 estrelas Nice translation of some of the works by a literary genius
Avaliado nos Estados Unidos em 18 de maio de 2020
Compra verificada
I am not Russian, but my Russian is fluent and I am very familiar with the Russian poetry (and love it). There are many walks of life that the Russian culture had never been underrepresented in (writers, composers, artists, mathematicians, physicians - to name just a few) and poets is, definitely, one of them. That does not at all mean that I love everything Russian – but their literature of 18-20 centuries, poetry, music and many other areas are firmly high up at the top there.

To me, Mayakovsky is the greatest Russian poet, period. His ability to use words in their expanded meaning, or assign a different meaning to a word altogether (that becomes clear from the context), or invent a word or combination of words that did not exist before, that - again - perfectly conveys what he was trying to say is just amazing. There is no one else, capable of expressing things quite like him. He takes words, combines them in an unimaginable before way and puts the reader through an unbelievable whirlwind of emotions. Sometimes, his words and sentences literally jump off the pages; the other times you do not even need to read the words, as they – somehow – directly connect to your senses. Sometimes that feels like getting hit on the head. Sometimes it is very tender, sometimes bright, sometimes dark. Again, that is very hard to compare with something else. No one knows how did he manage to do that, even though there have been many attempts to understand it. Some claim that it was because he grew up fully bilingual as a kid (he spoke Georgian fluently). That might be one of the reasons, as Georgian is a beautiful and expressive language (I am not Georgian, either - I understand a little and appreciate its beauty), but there have been many bi-, tri- and more-lingual poets, who had never even attempted what Mayakovsky managed to do. So, the jury is still out on this one – I do not think it will ever be returning, so to speak.

The following part is posted as a comment to the review by Listing Books.

Honestly, when I read the review by Mr. Listing Books, I couldn't believe it. I know quite a few folks who have a perfect command of the Russian language, speak it at the native-speaker level (both Russians and non-Russians) and who understand and appreciate Mayakovsky’s poetry for all the right reasons.
However, I had never heard of anyone who was able to get such a level of appreciation by reading an English translation. Moreover, I had never imagined it possible, as I was fully convinced that Mayakovsky’s ability to express things in his unique way was so much ingrained in the Russian language itself.
Not so, as it turns out – and I am very happy about that, as it means that more people would be able to appreciate his literary genius.
Thank you, Mr. Listing Books – whoever you are – for your great review. Thank you, Andrey Kneller for your translation – which I did not quite appreciate at the time I first saw it, but am happy to admit is good – as the proof is in the pudding.
Ler mais
Informar abuso
Traduzir avaliação para Português

Greg
3,0 de 5 estrelas A decent translation, though annoyingly lacking . . .
Avaliado nos Estados Unidos em 13 de julho de 2008
Compra verificada
I've read the superb little City Lights book of Mayakovsky's work ( Listen! Early Poems (City Lights Pocket Poets Series) , translated by Maria Enzensberger), and Kneller's translations holds up to that standard. The book has a decent selection of Mayakovsky's poetry, from various periods in his life. It's easy to get the sense that Kneller put a lot of time into making Mayakovsky's work both rigidly artistic while at the same time practical and vernacular, and this is ultimately why so many translations fail.

It is unfortunate that this book fails on a more superficial level: the content is fine but the book as a book is just embarrassing. There are numerous typos, including the lack of periods. It's quite obvious because it occurs so frequently. Also, the formating (most noticeably the m-dashes) is not consistent. I found myself going back and forth between the Russian and the English (both on facing pages), and finding quite easily inconsistencies.

The notes that are in the back of the book are also inconsistent. The note titles in the back will sometimes (but not always!) be the same as the words they are referencing in the text. For example, "Good!" is in the text, and "Good" is what the reference page lists. Now obviously this isn't a crucial problem, but it is annoying to see that a published book is being printed with such juvenile errors.

Also, let me take a brief moment to call out some "interesting" decisions that were made in the book layout. The book begins with a title page (that has a page number on it!); the book continues with its copyright page, which has a mere two lines (okay, it's an self-published book, but it's noticeably amateur). The following page is the critical statement on Mayakovsky that is by Marina Tsvetaeva, and it is the same statement on the back cover of the book. Now the book is isn't huge, so I do not really know why the quote was repeated. Anyway, after a dedication page (one line), and then an epigraph from Mayakovsky himself (one stanza), and the second title page, the book's main content begins. The body of the book is pretty much how it's supposed to be. But what was missing from everything just listed?

A table of contents.

That's right, the table of contents is located after the body of poetry that makes up the book, before the notes section. I am trying to figure out a logical reason for this, but it's escaping me.

The notes are all pretty much okay. I learned a lot of interesting biographical information in them, though some of the notes show more bias than others. Also, there are quite a few words and references in Mayakovsky's poems that, for some reason, don't make the cut. One of these is "Goethe's Gretchen," which is obviously an allusion to Faust; however, Mephistopheles gets an end note, which produces quite an enigma. Also, Zarathustra makes an appearance and has an end note but no mention of Nietzsche, who was an obvious influence, is made.

After the notes section, Kneller has kindly provided the reader with a 1 and 1/4th page biography of Mayakovsky. Well, if only it were a good thing. There is no birth date, no death date, and hey, the formatting is also completely haphazard (spaces in between paragraphs at varying amounts!). Also, the source of the biography is listed as being from the commercially shoddy (inferior) website, [...]. The included biography is only bits and pieces from what is on that site, too, which is apparently some rationale I have yet to understand.

The last page of the book has a barcode and says "Made in the USA." So there is no printing press information or contact information AT ALL throughout the entire book.

One last note: the entire book appears to have been created in Microsoft Word, and it appears that Kneller or whomever designed the book did not take the time to learn how to appropriately use headers and footers, as every page in the book (quite literally) has the same header and footer; and in addition, the headers and footers are in a ridiculously contrasting font that is more distracting than helpful.

I understand self-publishing is good, I just wish that this book had been edited by anyone with a brain, as Kneller is quite a good translator. If you're looking for the best book of Mayakovsky out there, steer to another direction.
Ler mais
19 pessoas acharam isso útil
Informar abuso
Traduzir avaliação para Português
Visualizar todas as avaliações
Voltar ao início
Conheça-nos
Ganhe dinheiro conosco
Deixe-nos ajudá-lo
Pagamento
E não se esqueça:
© 2012-2021, Amazon.com, Inc. ou suas afiliadas